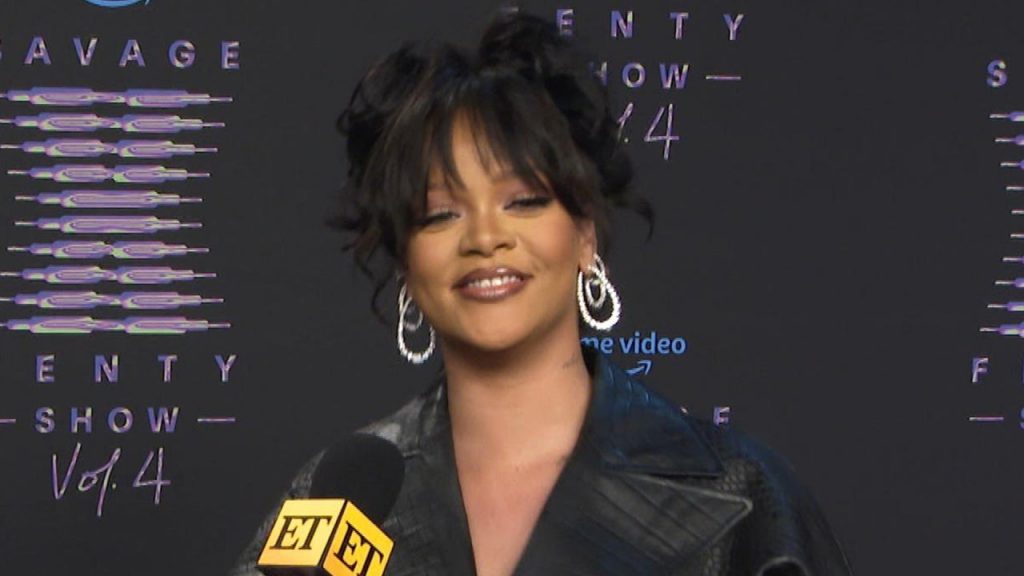 Rihanna is going into the new year already having scored one of the most highly anticipated performances of the year — the 2023 Super Bowl Halftime show. The National Football League announced that the singer will headline the Apple Music Super Bowl LVII Halftime Show in September, and fans have been craving to know more ever since.

Meanwhile, Rihanna is still coming to terms with the fact that she agreed to do it!

“I can’t believe I even said yes. It was one of those things that even when I announced it, I was like, ‘OK, I can’t take it back. Now, it’s like final,'” the singer told ET’s Rachel Smith on the red carpet for the October premiere of Savage X Fenty Show Vol. 4.

A source previously told ET that Rihanna is planning to make her performance unforgettable, adding that the “stars aligned” and now is the right time for Rihanna to take the stage again — and there’s no better stage than the halftime show.

The 34-year-old told ET that it was “now or never” for the opportunity, noting that as a new mom, “nothing would have gotten me out of the house if it wasn’t a challenge like that.”

“You could get real comfortable being at home as a mom, [so this is] challenging myself to do something that I’ve never done before in my career. I have to live up to that challenge,” she added.

While the “Work” singer wouldn’t divulge too many clues on what her performance for the Super Bowl would entail, she did reveal that she wanted to “incorporate a lot of culture” in her show.

“I want to incorporate different aspects of entertainment and things that I just enjoy and bring it to the stage,” she said. “I want to celebrate the music that I’ve made.”

Rihanna hasn’t released an album since 2016, and although her fans regularly rib the singer for focusing on her other profitable sources of income, Rihanna remains a powerhouse in the music industry. With a discography spanning two decades and hits such as “Umbrella,” “Diamonds,” “Disturbia,” “Don’t Stop the Music” and countless others, Rihanna is sure to rock football’s biggest night.

A source previously told ET, “Rihanna never intended to take this long of a break from performing, it’s just how things turned out.”

And while her fans have been eager to see her perform again, RiRi didn’t feel like she was too far removed from the stage, according to the source.

“Everything she does is theatrical and creative — all her fashion shows, her book, her makeup, it’s all part of her art,” the source continued.

At the Savage X Fenty Show Vol. 4. premiere, the singer also teased that “new music [will drop] way before the Super Bowl,” which she’s already made good on!

On Oct. 28, Rihanna released “Lift Me Up,” her first solo single in six years and the leading track for the Black Panther: Wakanda Forever original soundtrack.

The single was penned by Tems, G?ransson, Rihanna and Coogler, and has global influences attached to it. It’s a beautiful eulogy to Chadwick Boseman, who played King T’Challa, aka Black Panther, and died at the age of 43 after a four-year battle with colon cancer.

Fans will also see Rihanna in the highly anticipated Savage X Fenty Show Vol. 4, which will stream exclusively on Prime Video in more than 240 countries and territories worldwide. A press release promises the fashion show will challenge tradition and break boundaries with a new all-star lineup of models, actors, some of the biggest names in music and more.

The show sparked backlash when Johnny Depp was confirmed to be among the lineup of guest stars. A source told ET that Depp will be the first male to appear in this “star moment” of the show like other guests (Cindy Crawford, Erykah Badu) have done so in the past. Depp has already filmed his part.