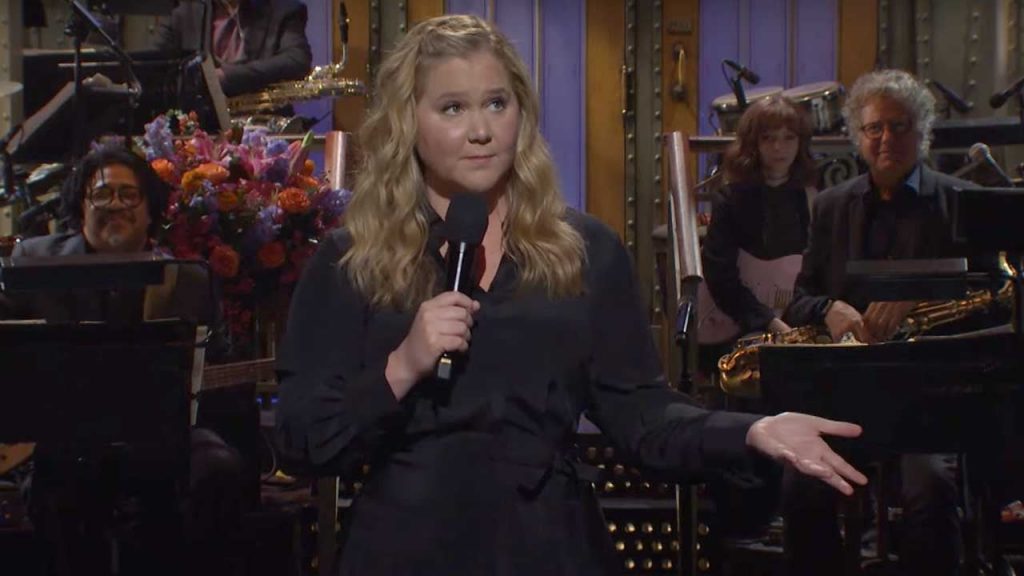 Whenever Saturday Night Live taps a stand-up comic to host, the monologue usually ends up being particularly strong, because it’s essentially a stand-up set. With Amy Schumer at the helm this weekend, the monologue proved to be a hilarious and raunchy highlight of the evening.

Schumer kicked things off talking about her son, Gene, whom she welcomed via c-section in May 2019, and her post-birth sex life with husband Chris Fischer.

“No matter how you give birth, the doctors all tell you — it could be vaginal, c-section…. But they tell you, no matter what, the doctors say, ‘You cannot have sex for six weeks. You got it? Six weeks, no sex,'” Schumer recalled. “I was like, ‘OK! Remember when you just Wolverined me open? Remember that? How about six years?'”

“My husband and I, we do have a good sex life,” she continued. “We have found that the best weekday to have sex is always tomorrow. Yeah. We’re like, ‘We ate today. Maybe we won’t eat tomorrow. That will be a good day for us.'”

Schumer went on to joke about how her husband is “on the autism spectrum.”

“He has autism spectrum disorder. Which used to be called Asperger’s, but then they found out — this is true — that Dr. Asperger had, like, Nazi ties,” Schumer explained, before quickly slipping “Kanye” in at the end of that statement, and then pretending it was some sort of mic glitch.

“It’s been really positive for our family to have him diagnosed. I understand so much more about his behavior, and it’s given him so many tools,” she continued. “Now, if somebody is in the middle of a long, boring story, he will straight up just walk away.”

“He never really lands a compliment with me. He tells me I look ‘comfortable’ a lot,” she shared. “We have different love languages. Like, a couple of weeks ago, we were sitting outside. It was a nice night. It looked like it was going to rain. I was feeling sentimental. I was like, ‘Even though these past couple of years with the pandemic and everything, it’s been so stressful, still this time, being with you and our son, they have been the best years of my life.’ And he just looked at me and said, ‘I’m going to go put the windows up in the car.'”

“Yeah. That’s my guy. It was one of the times we play the game ‘Autism or just a man?'” Schumer joked. “I’ll leave you with what he said to me right before I came on stage tonight. I said, ‘Babe, is this okay?’ And he said, ‘Well, it’s too late.'”

Who Is Hosting ‘Saturday Night Live?’ A Guide to Season 48