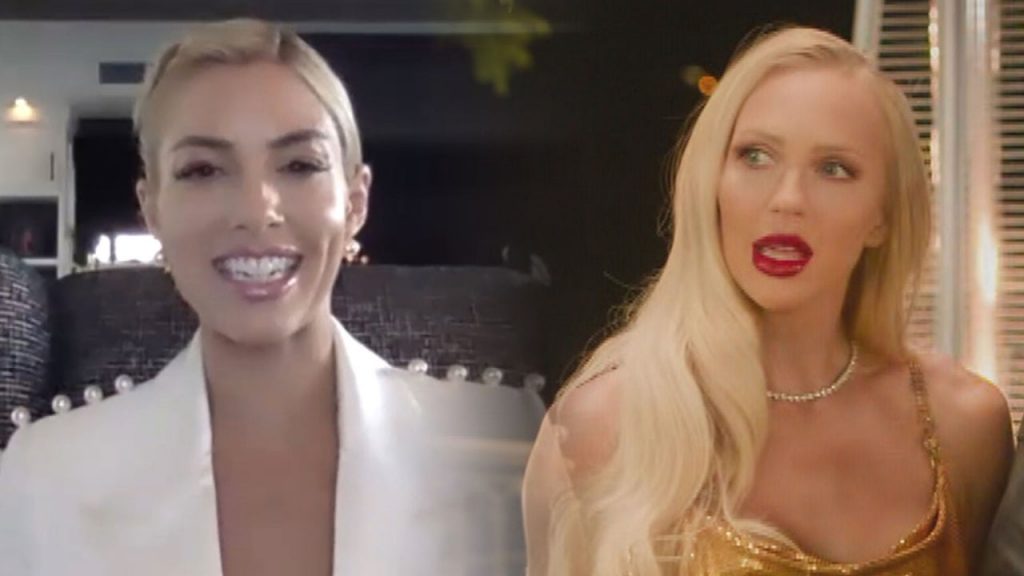 Spoilers ahead! This post contains information about Selling Sunset season 4, including the finale. If you haven’t yet watched, bookmark for later.

Christine Quinn might be “so good,” but Heather Rae El Moussa (nee Young) isn’t after their confrontation on the Selling Sunset season 4 finale. After 10 episodes of tension, Christine finally came face to face with her Oppenheim Group colleagues for a face-off that Christine essentially blew off. The women — namely Heather, Chrishell Stause, Mary Fitzgerald and newbie Emma Hernan — waited for hours for Christine’s arrival, hoping to clear the air (and maybe even clean the slate) after their collective agreement that Christine was one, lying about the timeline of her relationship with Emma’s mutual ex and two, needed to own up for all the wrongs she’s made (in their eyes, at least) over the last four seasons. But, after showing up three hours after the start of the event, Christine laughed off the collective olive branch/ambush, inciting Heather to storm off (chased by her then-fiance, now-husbandTarek El Moussa) and leave the event.

“I wouldn’t say a freak-out,” Heather clarifies when ET asks if that’s an appropriate descriptor for her reaction to Christine. “I mean, a lot led up to that moment that was not shown. There was a lot that happened hours before, and we all were there hours and hours and hours before Christine showed up. And I was going to take that time to have a really nice conversation with her and just clear the air with a lot of things that have obviously been spewing and she said, she said, she said, and so I just wanted to clear the air in a nice, calm way with her. And what people don’t see is, Tarek and I were heading out to St. Barts that night on a red eye. And I had been waiting around for Christine for hours. She knew I was waiting around to talk to her. She decided to show up hours later than all of us other girls were there.”

“I actually left and decided to come back because I knew she was going to show up in about 10 minutes,” Heather recalls. “But I was already an hour past when I was supposed to leave. And they’re like, ‘She’s coming in 10 minutes,’ and I said, ‘OK. You know what? I just want to talk to her before I leave on this vacation.’ And she showed up and she brushed me off.”

Heather says she found the whole ordeal incredibly frustrating, and promises she had no plans to go to a negative place with Christine, despite what the new mom might think.

“She disregarded the fact that we were all waiting for her, I was waiting for her specifically,” Heather reiterates. “She completely brushed me off and she’s like, ‘I’m good. I’m good.’ And I’m like, ‘If you’re good, I’m good, too.’ She wanted to mend a friendship with me, and the relationship. She showed me she didn’t care. So I’m good. I’m going on my vacation with my future husband, at the time, and so a lot had led up to that frustration. It wasn’t like I just had a freak-out and left.”

As Heather and Tarek stormed out of the party (a soiree thrown by brothers Brett and Jason Oppenheim to announce the expansion of their business to the El Moussas’ home turf of Newport Beach and, ultimately, the introduction of a soon-to-launch Selling the OC spinoff), Christine asked Heather if she’d be willing to have a one-on-one chat instead of a group discussion.

“At that point, I already felt disrespected,” Heather explains of turning down Christine’s offer. “I had been waiting for three hours for her. And then when she brushed me off, I was like, you know what? I don’t need to wait around and be late and miss my flight on my trip with my husband. So at that point, I was just done. She had disrespected me already.”

Cameras followed Heather and Tarek as they made their escape, capturing a fourth-wall breaking moment where Heather repeatedly reminds her HGTV personality husband that he is being recorded and is a wearing a microphone. Tarek seemed to ignore Heather, though, continuing to mutter out thoughts including, “She acts like an a**hole to everybody, she’s embarrassed about her actions…”

“In that moment when I was heated and upset, we did not actually know the cameras were on us,” Heather notes, “and then I turned around and I saw that they were filming us. So just as a reminder to protect my husband, I said, ‘The cameras are on us. The cameras are on us.’ He is a very strong-minded person. And if he sees that his wife is upset about something, he’s going to support me 100 percent, no matter what, as I would do for him. But it is a very different show [than he’s used to filming]. I don’t want him involved in the toxicity of the show that can happen and the drama. He doesn’t need to be a part of that. It’s girls drama and it’s just, he needs to stay away from that.”

Christine and Heather fell out largely over things Christine told the press about Tarek and their relationship. All that unfolded off-camera between season 3 and (the delayed due to COVID) season 4, which is in turn a bit confusing for viewers who last saw the two on good terms, with Heather helping to plan Christine’s wedding.

“You only see so much of our lives on camera,” Heather says. “We all have lives outside of camera and outside of filming. And it had been a lot of things building up, and her and I had not had a close relationship for probably over a year. And there’s just a lot of things that she had said and done to not only me and my husband, and talking s**t and just things to my close friends that I just, at some point, you can’t keep supporting someone and making excuses for them and being the neutral person.”

Their friendship (or lack thereof) took another onscreen turn, however, when Christine brought Heather’s name into her drama with Emma. After the two women established two different series of events regarding a mutual ex-boyfriend/possible fiance from years before, Christine revealed that the mystery man at the center of the saga was also romantically involved with Heather at some point. Heather says she never really dated the guy, describing it as a fling instead, and that her encounters with him did not overlap with either Emma or Christine’s. This all led to an emotional moment for Heather, who broke down crying to Chrishell and proclaimed she hated Christine.

“She had brought some things up on camera to the other girls and had called some of the girls off camera and said, ‘I’m going to drag Heather into this and I hope you have my back,’ so there was a lot of things that I didn’t say on camera and you guys are not informed about,” Heather reveals of why she was brought to tears. “She basically dragged me into her drama just to bring me into her and Emma’s drama that is so irrelevant in my life. So at that point, I’m like, ‘Why are you doing this? Why are you bringing stuff up that is so far in the past, just to cause issues with me?'”

The season ends with Emma and Christine’s facts (or maybe, alternative facts) at odds with one another. Heather won’t explicitly say who she believes, but does offer this: “I don’t believe a lot of things Christine says … but I do know that Emma tells the truth.”

“Christine’s trying to make a bigger deal about everything,” she adds. “And so whatever she thinks her timeline is OK, but she makes up a lot of things. So I would fact check that with Emma.”

Fans won’t have to wait long to find out what happened next, though, as the cast shot seasons 4 and 5 back to back, meaning when the fifth installment starts streaming, the action will pick up exactly where the agents left off in the finale.

“It pretty much continues right in, from the action, you see things continue and you see a lot more changes happen with the group,” Heather teases. “So I think you see some people working on things, new friendships formed, more drama, but I think things are a little bit on the mend.”

Heather offers that there is some “forward movement” for her and Christine, but friendship still seems off the table.

“Christine and I can be professional at work,” she states, matter of factly. “We can be cordial to each other. We’ve been around each other multiple times and things are fine. We’re not just fighting and catty and awful to each other. We had a friendship in the past and I don’t have to be friends with everyone. I can respect her at work. And like I said, be cordial and nice.”

“I don’t want to have animosity and be fighting and be catty all the time and have negative energy,” she continues, “but I just choose to not have her in my life because I don’t trust her as a friend. And loyalty to me is a huge thing. And when you’re happy and you’re in love and your life is going in such an amazing direction, I choose not to have people around me that I can’t trust. And friends are very sacred to me — and I don’t use that word [friends] lightly. So right now, we’re not friends. I don’t know if we can get back to that place. Time will only tell, and I have to see her actions being very consistent.”

Heather says the No. 1 thing Christine needs to do is win her trust back, and so far, that’s not looking likely.

“She sends me text messages and then I have proof to say that those are lying,” she reveals. “And the other girls, they tell me the truth. And I hear from the eight other girls. Are they all lying to me? And then this one person is the root of everything. Is she the one telling the truth that everybody else is lying? I don’t think so.”

Christine hasn’t made it a secret on social media that she feels frozen out by the other agents at The Oppenheim Group, going so far as to call them “mean girls” (though she’s the one who makes a reference to operating like Regina George in season 4).

“It’s not true,” Heather declares of Christine’s accusation. “There’s one common denominator. I mean, I think you’ve seen enough of me to know I’m not a mean girl. I’m a very loving, kind person. And I’m a girl’s girl. I’m very supportive of all the women at the O Group. We’re all hard-working. We’re all driven. We’re all kind and sweet. And like I said, there’s one person that no one gets along with. So is it all of us or is it that one person?”

“Oh, I did see a part [of season 4] where Christine called me a jellyfish,” she goes on to remember. “How I just follow what everyone else does, which is absolutely bulls**t. So I’m a very confident woman who doesn’t follow what anyone thinks or does. If I did, I’d be mixed into her bulls**t drama. I’d stay away from that. So she’s very wrong in that sense. But it’s just her making accusations and name-calling again.”

All four seasons of Selling Sunset are now streaming on Netflix.

Chrishell Stause on Where She Stands With Christine Quinn (Exclusive)