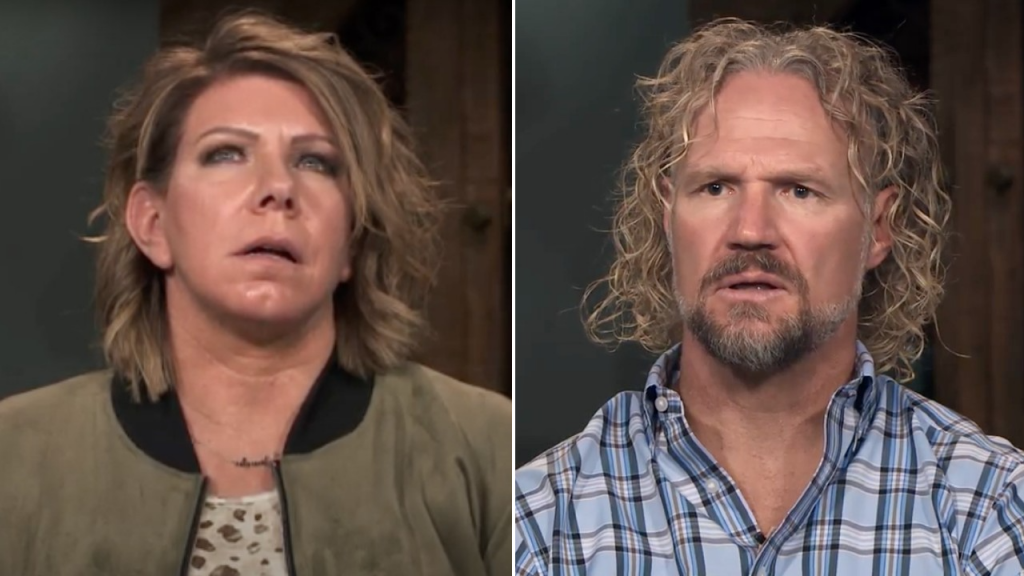 The relationships between Sister Wives stars Kody Brown and his wives can easily be described as complicated, but none more so than the one he shares with his first wife, Meri Brown. After more than a decade of estrangement and no intimacy in their marriage, the former couple finally announced their decision to “permanently terminate” their marriage despite legally divorcing in 2014 so that Kody could legally marry his fourth wife, Robyn, in an effort to adopt her children.

From 2014 to 2023, Kody and Meri considered themselves to be “spiritually married” even though they suffered a series of relationship setback that left them estranged and distant.

The couple hasn’t lived together for years in the wake of Meri’s 2015 catfishing scandal, and Kody made several comments during season 17 of Sister Wives about no longer considering himself married to his first wife.

From their 1990 wedding to where they stand today, here’s what led to the breakdown of Kody and Meri’s marriage.

Meri grew up in a polygamist family and met Kody at church when she was 18. The two abstained from any physical intimacy before getting engaged, including kissing.

“I was a little taken with Kody right off the bat,” Meri said in the family’s 2012 book, Becoming Sister Wives. “He was definitely cute, and had a great attitude. He was talkative and engaged me in conversation, and made me feel comfortable around him.”

Kody said of Meri in the book, “Meri was so cute and sweet when I met her that I had a hard time suppressing my hopelessly romantic nature. She had a remarkable purity about her. I had a sneaking suspicion that we were soulmates.”

They tied the knot in April 1990 and have both noted that they fully intended to add more wives to the family.

Meri tried to have children for years, but struggled to conceive. While Meri was struggling, Kody married his second wife, Janelle Brown, in 1993 and the two ended up having six kids together. Meri finally gave birth to her only child in 1995, but her fertility struggles has put a strain on her relationship with both Kody and Janelle.

In a 2021 reunion episode of Sister Wives, Meri shared that the intimacy went out of her marriage with Kody “about a decade ago,” meaning that they stopped being intimate years before the catfishing scandal ever even occurred.

In late 2014, Meri legally divorced Kody at his request so that he could legally marry Robyn and adopt her kids from her first marriage. The process was documented on Sister Wives and showed Meri struggling with the decision and resenting both Kody and Robyn in the aftermath.

Just a few months later, Meri found herself at the center of a catfishing scandal after she met a man whom she thought to be named Sam Cooper on Twitter in March 2015. “Sam” turned out to be a female named Jackie Overton, a career criminal who had catfished multiple others.

“I got into this place where I was talking to different people on social media and kind of making friends. I got into this situation talking to one person who really made me trust him,” Meri shared in a 2015 episode of Sister Wives. “He was just saying all the right things, being very kind and very compassionate and understanding. I trusted him.”

Compromising photos and voicemails of Meri were released online after months of phone calls and text exchanges between Meri and the catfish. Jackie even went on to pen two books, which are available on Amazon, about the online affair using the name Sam Cooper.

“I felt like I kind of was forced into doing and saying things because of all the things she said to me, like, ‘You’d better call him and leave him a message. You’d better tell him how much you love him.’ Because I was afraid of what she would do otherwise,” Meri said on Sister Wives, claiming that she was blackmailed by the catfish.

Meri claims to this day that she was not engaging in this online activity with the intention of leaving Kody, but he believes otherwise.

“When Meri had an affair, she was leaving my a**,” Kody previously said on Sister Wives. “Because she was like, ‘I’m done with this. I am done with you.’ She made it clear to everybody that she was getting out of there. She was done with us. And she can’t admit it now. We circled the wagons as a family to protect her when she realized that she’d been duped.”

The family stood behind Meri in the wake of the scandal, defending her, but it seemingly marked the official end of her romantic relationship with Kody. Despite this line, Kody has claimed that he and Meri were having problems long before the scandal.

“The catfishing thing was really just a wakeup call for Meri and I,” he previously stated. “Our problem ran much deeper than that, and it’s probably why the catfishing happened.”

While Kody’s wives all have separate residences that he goes to visit, he no longer stays with Meri.

“I knew what I needed from Kody, and I wasn’t getting it. He was very, very, very distant in our relationship. I asked him to just not stay there for a little bit,” Meri explained in an October 2022 episode of Sister Wives. “I said, ‘Can we just get through some of this stuff? Can we just take a break?’ He has interpreted that as I kicked him out and he has never come back.”

Though there seemed to be much less hostility between Meri and Kody in recent episodes, a romantic reconciliation between the two seemed unlikely.

“I miss physical intimacy with him,” Meri admitted in a January 2022 reunion episode of Sister Wives.

“I’m not going to ever be in a conjugal relationship with her because I’m not going to go through that emotional torture ever again,” Kody said. “There’s a point where intimacy is just damage.”

In February 2021, Kody told ET, “Meri and I are in an amicable relationship, but we’ve been literally separated for four or five years. We’re amicable, we’ve had a real struggle… I’m not mad anymore. I’m not angry anymore. I’m not hurt anymore. So, that’s progress.”

In the wake of Christine Brown splitting from Kody and leaving the family in 2021, some of the past pain between Kody and Meri seemed to have healed.

In that same episode, Kody described his relationship with his first wife as “very good,” but added, “It’s not a married situation.” He said that though their relationship is “amicable,” he doesn’t think that it is “fulfilling” for Meri, “not in any way.”

Meri seemingly agreed, saying, “My relationship with Kody has not improved as far as a husband and wife relationship. That’s not something that he’s interested in. I mean, it just is what it is, it’s where we are.”

And when Sister Wives fans began to comment on the possibility of Meri leaving the marriage in the wake of Christine’s exit, she wasn’t too pleased by the idea.

“My strength is sticking around and seeing if Kody would be willing to work on a relationship,” Meri said in a November 2022 episode. “So I leave that door open, but I’m not pining away for it.”

After Christine declared herself divorced from Kody due to the fact that they weren’t legally married, Meri found herself questioning whether or not she and Kody were still married.

“Kody and I are in this situation. We’re not legally married. I want to work on the relationship, but Kody has just said that he doesn’t,” Meri explained. “Does that mean we’re just not married anymore? That’s not how I consider it. I feel like we’re still married.”

But Kody had a different take on the situation, saying, “I don’t really consider myself married to Meri. If she wanted to move on and marry another, she wouldn’t get an argument with me. I don’t believe that we can ever be functional and I don’t believe that I will ever be emotionally safe with her.”

Meri reacted to Kody’s statement during the show’s One-on-One tell-all special, stating, “It just doesn’t make sense to me.”

In fact, according to Meri, Kody did the exact opposite.

“Even since being in Flagstaff, he has led me to believe that he was trying,” she said. “Our first anniversary that we had here in Flagstaff [he was saying], ‘Cheers to a new beginning,’ as opposed to this last anniversary. He was like, ‘I don’t even know why you called me, Meri.’ He’s like, ‘We’re not married. We’re not acting as married.'”

While Meri wanted to address their split publicly, she said Kody did not wish to do so.

As for the possibility of a reconciliation, Meri hasn’t shut that door, but she believes Kody has. “I would [reconcile]. I definitely would,” she said. “But I don’t think he’s interested.”

After it was reported that the former spouses had ended their marriage based on Meri’s comments in the One-on-One special, Kody and Meri decided to take matters into their own hands on Jan. 10, 2023. The exes released a joint statement about the status of their marriage.

“In light of a recent unapproved press release, we feel compelled to share our own truth, in our own way, and in our own timing,” the former couple wrote at the time. “After more than a decade of working on our relationship in our own unique ways, we have made the decision to permanently terminate our marriage relationship.”

The exes note in their statement that they are “committed to kindness and respect toward each other and to all members of our family.”

They signed the statement, “In kindness, Meri and Kody.”

She claimed that her comments in the One-on-One special were not her confirming the end to their marriage at the time.

“The information, content, and timing was inaccurate and was based on a highly edited version of events that had been filmed months prior,” Meri wrote. “In the months since the taping of those interviews, Kody and I have had many open and honest discussions that have led to our announcement today.”

Meri added that there is “so much more to be told” and assured her fans she would do so.

“For now, know that there is peace in my heart, and I hold no animosity toward Kody. I am not, and pray that I never will be, in a place where I will enjoy making, or seeing you make, rude and demeaning comments about him,” she added.

Meri also urged her followers to be aware of the impact of their comments.

“Please be considerate of the fact that we are real people, with real lives, and real emotions. Please try to refrain from congratulating me at the break up of my marriage,” she wrote. “I value the relationship I had, and look forward to stepping into 2023 and my future with grace, kindness and power.”

‘Sister Wives’: The Surprising History Between Kody and His Wives