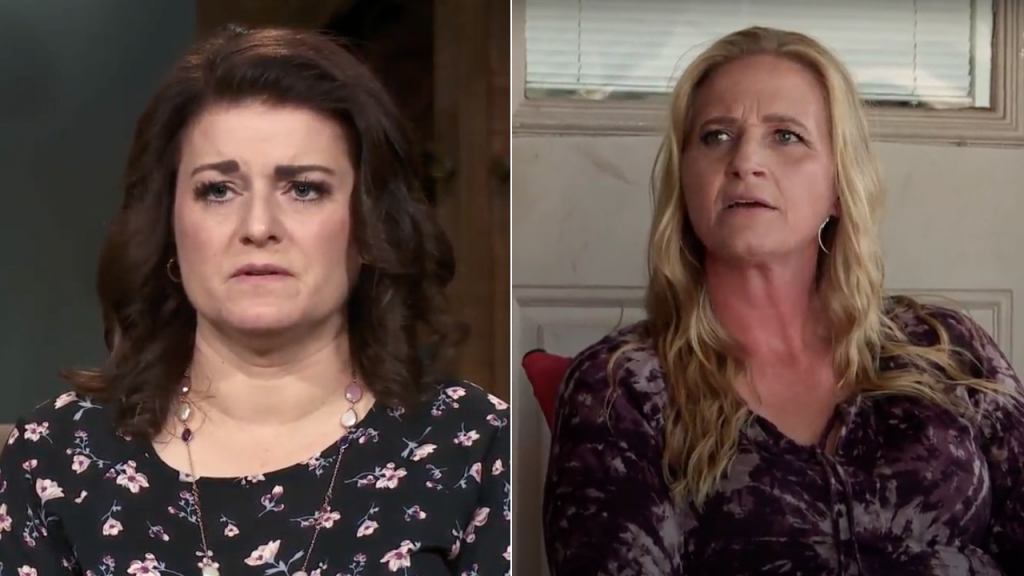 A miscommunication led to some heated tension on Sunday’s Sister Wives.Christine Brown asked her fellow sister wives and her ex, Kody, to meet her to discuss the fact that she’d sold her house and found a new home in Utah in a matter of days. Things went south when she dropped the bomb that she was planning to move in a week.

“I don’t know, it felt like I just got pushed out of an airplane and I wasn’t ready,” Kody’s fourth wife, Robyn, says in her aside interview.

Kody is still upset with the fact that he thinks Christine was talking about their estrangement and her intentions to divorce him with several of his kids long before she let him know.

He brings up the fact that he found out through the grapevine, and Christine notes he should have come directly to her.

“When you hear things through the grapevine, you should maybe address the source because they asked me, ‘Why are you staying? Why don’t you just leave?'” Christine says of “several” of Kody’s children.

“Why would my children be talking her into leaving unless she was telling them that she was in a loveless marriage?” Kody questions in an aside interview.

Robyn seems to be of the same mindset and asks Christine why the kids would ask her about her marriage.

“They saw how things were in our family. They saw how separate we’ve been in Flagstaff,” Christine explains. “They also saw that Kody and I had been struggling for a long time. The kids were like, ‘It looked like in Vegas that you and Dad weren’t really close anymore.'”

Robyn then proceeds to go into her recollection of their family’s time living in Vegas, noting that Janelle and Kody’s relationship was “better than it ever had been” and that Kody and Christine had been on “fun dates.”

“So either you guys were faking it in front of me. I don’t know,” Robyn says, getting visibly upset.

Christine seems confused by the outburst in her confessional, saying, “I don’t know exactly why she’s saying I’m lying. Kody and I did struggle in Vegas and my kids did see it.”

Robyn continues to get upset, claiming that Christine was saying that the only relationship not struggling in Vegas was the one between Robyn and Kody.

Kody’s first wife, Meri Brown, seemingly pinpoints the issue, saying in her confessional, “I’m pretty sure Robyn maybe misunderstood something that Christine said. It sounded to me like she was quoting questions that she had been asked and I think Robyn had took it that it was just about her and Kody.”

Janelle, who has been publicly very close and supportive of Christine, is critical of Robyn and Kody’s reaction to her leaving the family, saying the pair are “trying to invalidate Christine” and make it seem like “she’s being crazy and doing this on a whim.”

Janelle is also uncomfortable that her own relationship with Kody is being “used as ammunition against Christine.”

Robyn presses on as Christine remains confused by the entire interaction.

“You were saying the only relationship that was going well was mine and Kody’s,” Robyn says.

“I never said that,” Christine argues.

“You did say that. You said, ‘In Vegas, the only people that were close was us,'” Robyn insists.

“I didn’t say that,” Christine says.

After more back and forth, Robyn finally admits in her confessional that she misunderstood Christine’s comments, leading to her emotional response.

“I must have gotten confused because I do not know how I got that out of what she said,” Robyn admits.

The rest of the tense discussion will play out in next week’s episode of Sister Wives. In the preview for the upcoming episode, Kody seemingly loses his temper at Christine, shouting at her while getting out of his chair.

“Man, just the knife in the kidneys over all these years. The sacrifices that I made to love you!” he shouts.

Meri says she’s “glad” that Kody said what he did and viewers see Robyn and Meri walk off with Kody as Janelle hugs a crying Christine.

‘Sister Wives’: Kody and Christine Argue About if They’re ‘Divorced’

‘Sister Wives’: Robyn Is ‘Struggling’ Worse Than Ever in Kody Marriage