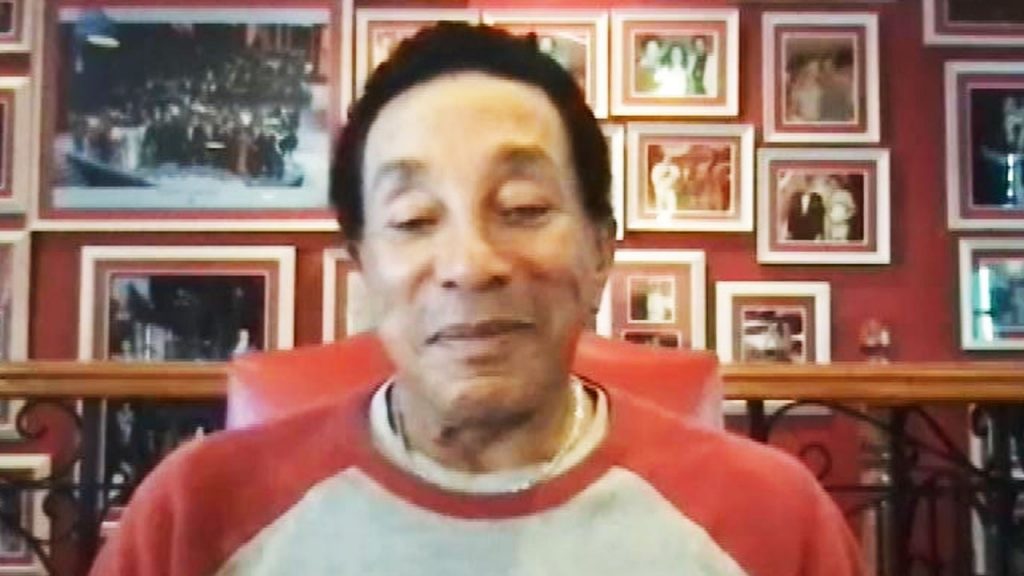 While speaking to ET’s Matt Cohen about his upcoming Lifetime movie, Miracle in Motor City, the legendary Motown singer expounded on his hospitalization last year after contracting the coronavirus and his fears that he would never sing again. In October, Robinson revealed that he was hospitalized for 11 days and doesn’t remember “four or five of those days.’

” I am very happy to share [my story] because I hope it helps someone,” the singer told ET when asked to share his experience. “COVID just comes on and the people ask me today, who knew that I had it… where did you get it, how did you get it — I don’t know. I have no idea how I got it. All I know is I looked up and I had it.”

“It was a horrible horrible thing and while I was going through it I wasn’t really thinking about ‘Hey man, perhaps you will never get out of this hospital alive,'” he adds. “I wasn’t thinking like that. I was just thinking about [how] I got to get myself together.”

The 81-year-old singer admits that the severity of his condition frightened him, advocating that people follow the guidelines implemented by the government, including vaccinations and mask mandates. Calling the virus a “real killer,” the singer stressed how his experience shook him. He explained that doctors said he was a lucky case aided by the fact that he regularly exercised and took care of himself.

“Protect yourself and those that you love because it is a real killer and it’s a horrible thing to have to go through,” he said. “Some people go through it mildly but you are talking to someone who went through it severely. So when you go through it like that it’s a really rough health thing to overcome… [if it wasn’t] for the grace of God, I wouldn’t be here talking to you guys and I’m sure of that.”

Now, the singer is feeling better and has gone back to work, including making movies and performing his music. Despite an earlier attempt at retiring, Robinson reveals that he doesn’t see himself taking another break from his “impossible dream” soon.

“I tried retiring from this one time and I was miserable for three years. The reason for that is because I can’t find anything to replace it for me,” he shared. “You know, especially for my age, here I am still doing it and people say ‘why are you still doing this?’ I love my job, I love doing my job and [when] I go to work, man, there are people there who have Black children with them, their kids are sitting in their laps watching the concert and when I first saw them, they were sitting in their parents laps! When that happens I am so grateful and blessed.”

It’s one of the reasons Robinson admits he was so gung-ho to work on Miracle in Motor City alongside Tia Mowry, who stars in and produces the Lifetime film. The film follows Amber Dupont (Mowry), who bites off more than she can chew when she takes charge of her church’s annual Christmas pageant and inadvertently promises to deliver a special performance by the Motown Legend. When her best friends secretly enlist Amber’s former flame Eddie (Mark Taylor) to help, the pair reconnect in a quest to find Robinson and convince him to appear.

“I’ve always wanted to do some acting really and never really had a real opportunity to do it and I always said that if I did it, I didn’t want to play myself. I wanna be a character, you know, I don’t have to be the star of the movie or none of that, I just wanna be a character in a movie,” Robinson revealed.

Even though he does play himself in the film, the singer explained that the script drew him to the project, saying that he thought it was “so beautiful” and “warm” that he had to join the production.

“It’s so wonderful,” he adds. “It’s a Black story about Detroit and that’s where I’m from, that’s my home. And then I found out Tia’s in it! I said, ‘okay man, like it’s got everything to [convince] me to be in it.’ I was very very happy to be a part of it even if I’m playing myself.”

Mowry shares the sentiment, telling ET that she remembers meeting the legend for the first in her teens and being so nervous. She admits that when she found out Robinson was part of the project, she didn’t believe it at first.

“I was like I’ll believe it when I see it and when they told me that, yeah he is, I was like sign me up,” she shared, laughing.

“Motown is very influential when it comes to the African American culture and I just love that we were able to put a spotlight on that within this movie,” she added. “Representation is really important to me and to be able to actually go to the Motown Museum and see pictures of Smokey and Diana Ross and Michael Jackson, and then to just to be able to have that Motown flair in this movie makes it special and sets it apart from all of the other Christmas movies that are out there. This one is really really special.”

Holiday Movies Worth Watching on Hallmark, Netflix and More