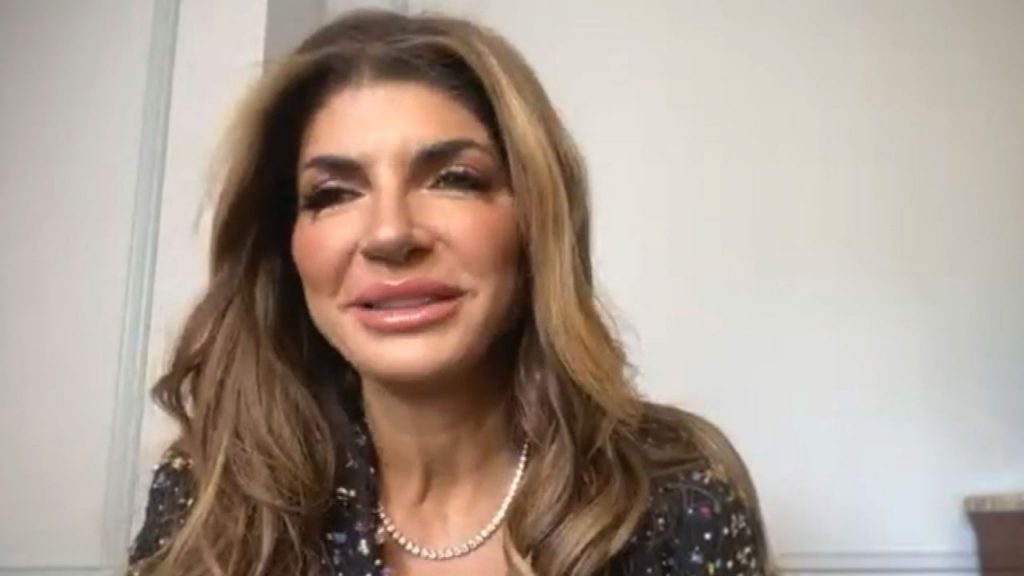 Teresa Giudice isn’t letting anyone hurt her happiness. The Real Housewives of New Jersey star is riding the high off her engagement to Luis “Louie” Ruelas last month, despite the onslaught of negative press that came soon after, with tabloids saying the couple moved too fast and questioning Louie’s intentions with the reality star.

“I say like, ‘Please mind your business,'” Teresa messages to the haters over video chat with ET. “You should want someone to be happy, because if you want someone else to be happy, then happiness comes to you. I’m about that. I’m not about ever hurting someone or tearing them down or anything like that. And listen, I know people make all these judgments and say all these things on social media regarding him. Like he wants to be on TV. He so does not want to be on TV. It’s so not his thing. If anything, he’s supporting me, but it’s really not his thing. And the craziest things that they say, like he planned to meet me that day. No, he didn’t even know who I was, and he’s never been at the Jersey Shore, that was his first time. And it’s crazy.”

Teresa and Louie, an entrepreneur, met on a fateful trip to the Jersey Shore in the summer of 2020, on a street where Teresa once prayed to her late parents to send her a good man. As their romance became public (and therefore, public fodder), followers dug into Louie’s past to resurface unverified (and even debunked) allegations against his character.

“I wish people would just leave us alone,” she says. “Anybody that’s negative, just please leave us alone. Because first of all, they’re never going to destroy our happiness, just leave it at that. It’s never going to happen. And I’m a very strong, strong individual. If everyone doesn’t know that, I am. And if they knock me down, I’ll get right back up.”

“He’s new to all this, to public scrutiny, which is sad, and this is not something he signed up for,” Teresa notes. “He just signed up for, he met me, we fell in love, and that was it. And I feel bad, so I’ll do anything I can to protect him.”

“I said to him, ‘Just follow my lead. I got you,'” she quips, having learned how to navigate “the blogs” and beyond over the past 12 years on reality TV. It remains to be seen if Teresa and Louie’s engagement plays out on season 12 of RHONJ, set to premiere in 2022, as it went down after filming wrapped on what’s been teased as a blowout season. However, cameras did capture the sweet moment, which played out on a getaway to Greece with Teresa’s close pal (and one-time co-star), Dina Cantin (nee Manzo), and her husband, Dave.

“I was totally surprised,” Teresa says of Louie popping the question. “It was supposed to happen the end of September. We were supposed to go to Capri and St. Tropez, and then they closed down Italy, so then he switched the trip to Greece. And yeah, there was so much going on. We were moving in together. I mean, listen, he kept telling me, ‘I can’t wait for you to be my wife.’ But that’s it. I’m not the type to ask for anything. I always think it should be on the guy. I don’t think– you should never ask to get engaged.”

“So I had no idea,” she continues. “I was totally surprised. It was absolutely amazing. I was in awe. I just didn’t know where to look first. It was just so magical. It really was magical.”

Teresa says every step of this relationship has felt right, knowing early on in their courtship that she’d be Mrs. Louie Ruelas one day.

“He’s a Taurus like me, we’re so much alike,” she admits. “Even my daughter, Gia, says it. They all say it. Like, ‘You guys are so much in sync with each other.’ We are. We both like the same things. Know how they say, ‘Opposites attract?’ Well, not with us. I don’t like opposite. We both understand each other. We’re both the same person. We like the same things. And he just understands me, I understand him. I love the way he speaks, the way he is, his heart, his mannerisms. He’s a gentleman. He knows how to treat a woman.”

That is on full display on The Real Housewives Ultimate Girls Trip, the new all-star mash-up show on which Teresa stars alongside Housewives from across the country: Beverly Hills‘ Kyle Richards, Atlanta‘s Cynthia Bailey and Kenya Moore, New York City‘s Luann de Lesseps and Ramona Singer, and New Jersey’s Melissa Gorga, who, of course, is also Teresa’s sister-in-law. The premiere episode kicked off with Louie giving Teresa eight handwritten love letters, one to open each day while she was away on the vacation.

“He always gives me cards, and I love that, and I give him cards back,” Teresa shares. “So we always give each other cards. He always writes me the most beautiful letters and notes, and he sends me the best texts. And I’m like, ‘Oh my god. Now I have to text him back!’ He’s just so perfect with his words. And then I’m just like, ‘Oh my god.’ He always gets me right in my heart. He’s amazing, he really is. I’m so lucky to have him. And I really feel like my parents did bring him to me because he’s– I don’t know what’s perfect, but in my eyes, he’s pretty perfect.”

“He’s amazing with my daughters,” she gushes. “I mean, I could go on and on and on. He’s a great father.”

The two are settling into life together in the Garden State, gearing up for the holiday as one big, blended family.

“We just got engaged, so I’m just enjoying being engaged, and we just moved in together, so I was literally still unpacking,” Teresa confesses. “And now the holidays are coming. He’s like, ‘Babe, I can’t wait to decorate.’ Christmas is his favorite holiday. And I’m like, ‘Oh my god, we just unpacked and now we got to decorate the whole house?!’ But Christmas is his favorite holiday. He’s like, ‘Babe, I want to decorate so much,’ and I’m like, ‘OK.’ So that’s the next thing.”

With a recent move and Christmas on the horizon, wedding planning is on the back burner until 2022. For now, Teresa’s focused on the experience that was Ultimate Girls Trip, a trial by fire of sorts when it came to filming with outspoken RHONY OG Ramona.

“Ramona gets into it with a lot of people,” Teresa teases. “I can’t wait for you guys to watch and see how it turns out.”

Ramona’s first target was definitely Teresa, though. Before the trip began, she called up Kyle and asked for advice on how to handle the RHONJ star, whom she compared to Scarecrow from The Wizard of Oz, as in she doesn’t have a brain. That dig made its way through the grapevine to Teresa, who called Ramona out on it, sending the newly minted realtor into an apology tailspin.

“I was shocked to hear what Ramona had to say about me, because it’s like, never judge a book by its cover or whatever,” Teresa says. “People like to say whatever they want to say, but you should really get to know a person first before you make any judgment on that person. Judging someone is the worst quality someone could have, so that’s it.”

Teresa hopes Ramona “learned a lot of lessons on this trip,” the main one being to “life each other up.”

“I can’t wait for you guys to watch how she eats her words,” Teresa coos. There’s one moment teased in the trailer where Teresa turns Ramona’s own words against her (to an extent); famous for saying “I support other women,” Teresa tells Ramona, “You’re not a girls’ girl.”

“I’m just speaking how I feel,” Teresa says of the exchange. “I never have any ulterior motive and try to hurt anyone. I’m not a vindictive person. That’s just so not me. I usually speak the truth and how I feel, that’s what I say. But none of us are perfect. Listen, we don’t always say the right thing, but that’s how I felt. That’s the vibe she was giving me, and that’s why I said that.”

Teresa owns up to “liking [Ramona] a lot” after the vacation. In fact, she says she bonded with everyone on the cast, including Melissa, despite moments in the premiere that caught the eyes of viewers: One, emphatically telling producers that her sister-in-law does not count as an “OG” and two, seeming unenthused when Melissa asked Teresa if she was excited to be on the trip with her.

“What am I going to do? Jump up and down? ‘Oh, yes, I’m so excited!'” she cracks, going on to say she was excited to spend time with her family.

“No, listen, she’s my sister-in-law,” Teresa says. “The thing is, I would’ve wanted to go with someone I get along with, and that would be either Melissa, Dolores [Catania], Jennifer [Aydin]. Those are my girls. And of course, Melissa’s my sister-in-law, and I’m sure they picked her because she’s next in line to being there the longest.”

As for the friendships she walked away from Turks and Caicos with, Teresa gives a special shout-out to the women of The Real Housewives of Atlanta.

“I bonded, I would say, the most with Cynthia,” she shares. “[And] I have to say, love Kenya. She had my back from day one. And what I have to say about that is, that’s pretty amazing. We met once at a work event, and I think we bonded at that work event, and for her to have my back — and I can’t wait for you guys to see how it plays out — for her to have my back, I was so touched. I really was. I was so touched because I’m like, ‘Wow, this is a stranger that had my back.’ She met me once, we bonded, and she stuck up for me. And I was just like, ‘Wow.'”

“I never had that on Jersey,” Teresa adds. “Like, someone really sticking up for me, because it’s like I always have to fend for myself because here everybody’s always coming at me. And I’m all about that loyalty and respect. I’m very big on that. So Kenya, I have to say, she’s pretty amazing. And I have her back for life because I never forget that.”