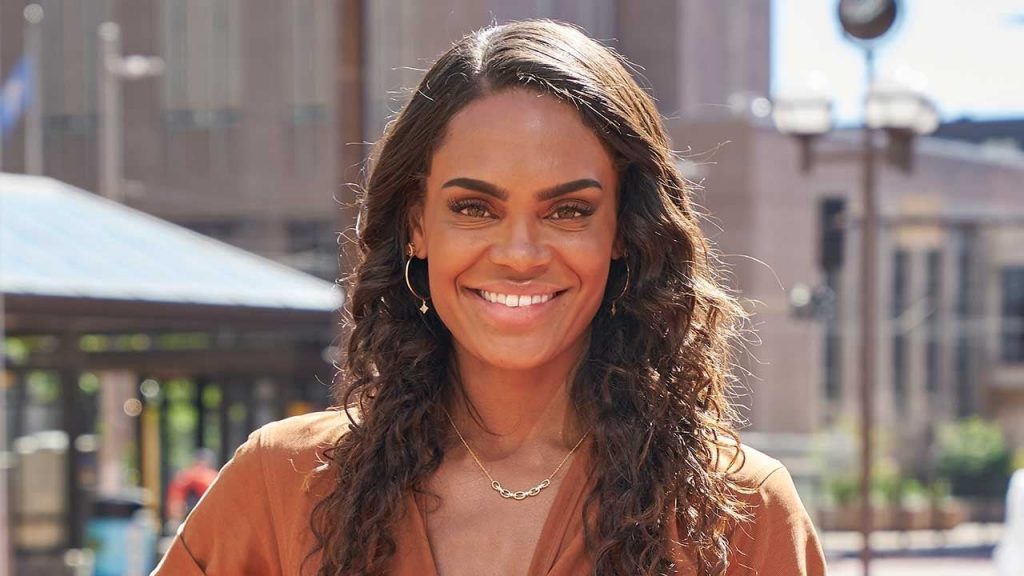 Michelle Young returned to her hometown amid her search for love. Tuesday night’s episode of The Bachelorette saw the teacher and her suitors head to Minneapolis, Minnesota, but the drama followed them there from Palm Springs, and ET is breaking it all down in the recap below.

Michelle deepened her connection with Joe on her first one-on-one date of the week, before rumored future BachelorClayton Echard had his turn in the spotlight.

Michelle introduced one of her suitors to her friends next, but an ongoing controversy threatened to disturb their growing connection.

Things wrapped up with a preview of the rest of the season, that hints at more tears, heartbreak, and love ahead.

Keep reading for a full recap of episode 5 of The Bachelorette.

After arriving home and updating her parents on her journey thus far, Michelle picked fellow Minnesotan Joe for her first one-on-one date of the week. Michelle threw out the first pitch at a Minnesota Twins baseball game, before walking Joe down memory lane at her high school.

“I feel like Joe would’ve been my crush in high school because he played basketball, he has a good head on his shoulders, and is good-looking,” she told the cameras following her one-on-one basketball game with Joe. “… He and I just have the magnetic energy between us.”

Joe felt it too, telling Michelle that it was “probably the best date I’ve ever been on.”

Things turned more serious during the nighttime portion of the date, as Joe opened up about the role sports, and the injuries he sustained while playing them, impacted his life. After multiple surgeries and an inability to get back to a pre-injury place on the court, Joe told Michelle he struggled with anxiety and depression, and even contemplated suicide. Eventually, he decided to give up the game.

Both Joe and Michelle were crying after his reveal, as she assured him she understood the “pain” that caused him as an athlete.

“Kissing Joe is always great, but tonight there’s just a different meaning behind it,” Michelle said in a confessional. “… I’m very grateful that Joe trusts me enough to open up about all he’s experienced. I feel like after today, my feelings for Joe have grown tremendously.”

After getting a kiss and a rose, Joe was flying high with Michelle during a ride on a Ferris wheel.

“Today was the most powerful, special, perfect, stars-aligning date I’ve ever been on. I feel like you have two souls that have kind of been living side-by-side without even knowing it, and I feel like today we got brought together,” Michelle said. “I am very excited to see what the future has in store for me and Minnesota Joe.”

When the men on the group date got to U.S. Bank Stadium, where the NFL’s Minnesota Vikings play, they were surprised to learn that it wasn’t football in their future, but a competition to be the true Viking.

After the men yelled war cries, threw tree stumps, donned Viking gear, ate fermented fish, and arm wrestled, it was Clayton who was picked as the Ultimate Viking. Following his big win, Clayton had a good conversation with Michelle, where they bonded over their shared love for their families and similar upbringings.

Chris S., who had been annoying the guys all date with complaints, didn’t talk to Michelle the whole night, but did continuously lament that he didn’t get a one-on-one date after sharing his concerns about Nayte with Michelle.

Michelle, unaware of the storm brewing inside of Chris S., gave Clayton the rose, as the commodities broker fumed about the Bachelorette’s lack of attention toward him.

Nayte and Michelle began their one-on-one date cruising the lake on a boat, before two of Michelle’s friends, Allie and Tia, joined the fun. The teacher’s pals were impressed by Nayte and picked up on his chemistry with Michelle. The whole thing, Michelle told the cameras, “went better than I could’ve imagined.”

The good vibes continued into the nighttime portion of the date, when Nayte discussed about not being able to be himself in past relationships. It was a struggle Michelle was all too familiar with, as she opened up to the sales executive about a time she got seriously ill from a toxic relationship, and how, instead of taking care of her, her then-boyfriend ended things.

Nayte responded by comforting her, and telling her, “I feel real feelings. This is crazy. If there was a best-case scenario, this would be it.”

The pair’s special moment was interrupted when Chris showed up and asked to speak to Michelle, which Nayte thought was “weird.”

Chris told Michelle that he felt “played by the whole situation” and warned her against making “the wrong decision.” Michelle told Chris that she was “caught off guard” by his speech during last week’s episode, and ultimately left “frustrated” by it. Chris accused her of being “fake” toward him during the group date, while she blasted him for not having “a good attitude” during the outing.

“I want a man who is going to stand and support me when I speak, and not a man who’s going to speak for me,” she said. “…Ultimately I do feel like we’re not necessarily on the same page. I just don’t see this relationship progressing, and so I do need to walk you out.”

With that, Michelle walked Chris out and returned to Nayte, telling him that their chemistry is “unlike anything I’ve ever felt before.”

“This is easily someone I could see genuinely wanting to fight for for the rest of my life,” Nayte said in his confessional, with Michelle adding in hers, “I’m very crazy about Nayte. I do start to get this feeling that this is my person… I do feel that I am starting to fall for Nayte.”

During the cocktail party, Michelle shared special moments with Rick, Brandon and Rodney, but had an awkward conversation with Martin.

The personal trainer accused Michelle of telling all the guys the same thing, and went off on a tangent about women he’s dated in the past being “high maintenance” and expecting him to do everything for them. She pressed him on what makes a woman high maintenance over a man, but he couldn’t give her a good answer.

Martin left the conversation believing that there was a “miscommunication on her end,” while Olu told the camera that the personal trainer was “two-faced.”

Michelle still gave Martin a rose, along with Rick, Olu, Brandon and Rodney, which sent Casey and Leroy home.

Fans were treated to a preview of the remainder of the season next, with all the men openly expressing their growing feelings for Michelle.

“They all have told me that I’m their person,” Michelle says in a confessional of her suitors, “but I can’t be everybody’s person.”

Michelle goes on to sob about having to break someone’s heart and the fear that hers could be broken, as her dad expresses concern that one of her men could be “a jealous person.”

Elsewhere, Clayton accuses Nayte of being “an actor,” and one man’s dad tells the Bachelorette that his son is not ready for an engagement.

Michelle feels sick to her stomach as she realizes, “I could have stronger feelings for him than he does for me. I’m terrified.”

Clayton, Nayte, Rodney and Michelle are all seen sobbing, with the Bachelorette herself crying in her finale dress.

‘The Bachelorette’ Recap: Michelle Questions Who She Can Trust