‘The Bachelorette’ Episode 6 Recap: Michelle Eliminates Half Her Suitors Ahead of Hometowns 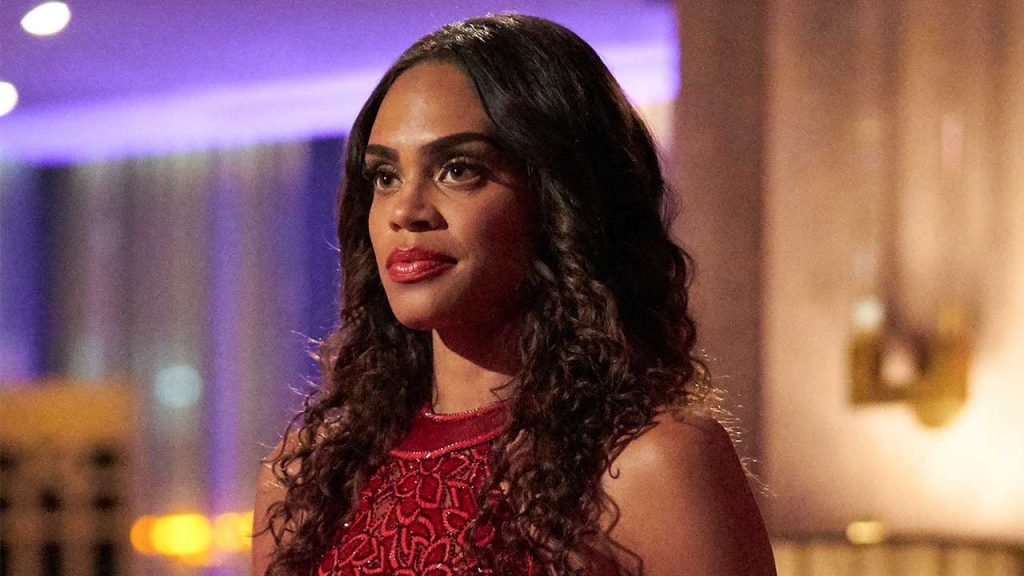 Michelle Young‘s decisions aren’t getting any easier. Tuesday night’s episode of The Bachelorette saw Michelle send home the rumored future Bachelor, go on her last group date, and make history with her final four men, all of which ET is breaking down in the recap below.

The episode kicked off with the remaining men getting a visit from four of Michelle’s students. Though Clayton impressed them enough to earn the one-on-one, Michelle wasn’t as smitten as her fifth graders.

The last group date of the season saw Joe in his element, and Martin’s true colors emerge, before Brandon met Michelle’s parents in the most awkward way imaginable.

A canceled cocktail party and two heartbreaking goodbyes followed, before Michelle readied herself to meet her four remaining suitors’ families.

Keep reading for a full recap of episode 6 of The Bachelorette.

The final eight men got some unexpected visitors at the start of Tuesday’s episode, when four of Michelle’s students arrived and announced that they were taking over the dates. The fifth graders proceeded to grill the men on marriage, kids, and the PDA that they may or may not have shared with Michelle.

Nayte, Olu and Rodney earned some fans, but one of the kids didn’t “really like Martin” because he was “trying to show off” and “wears too much cologne.” It was Clayton who won the most favor, and his fort-building abilities landed him the first one-on-one date of the week.

With the kids in charge of the night, Clayton and Michelle headed off to a museum in a limo full of pizza and candy. When they got to their destination, the pair appeared to have a blast, playing tag, dancing and having a romantic moment in the planetarium.

At dinner, Clayton opened up about his desire to have a family, while Michelle told the cameras that “something’s missing” in her relationship with the orthopedic sales rep. Eventually, Michelle told Clayton that, while he “checked very single box of all the qualities that I’m looking for in somebody,” she wasn’t ready to meet his family.

“I’m thankful for this opportunity and for meeting you, and I know you’ll find what you’re looking for,” he responded. “I’m sorry I couldn’t be that.”

As Michelle praised Clayton as “a great guy” in a confessional, he’s driven away wondering, “Where did I go wrong?”

“I’m completely vulnerable, and this is what happens when I become completely vulnerable,” he said. “I open myself up to be hurt. I stayed closed off for so long, because it takes the right person for me to feel comfortable opening up, and Michelle did that. She opened me back up, and now I feel like I want to go back into that shell to protect myself against being hurt.”

Later, he received a visit from two of Michelle’s students, who gave him letters. The first note praised Clayton’s forts and muscles, but the second one, which called him “super genuine” made him cry, something he hadn’t done “in years.”

“I want kids one day. I just want to find love so badly and have a family and start that chapter of my life,” he said through sobs. “I want it more than anything else. I’ll do whatever it takes to get that.”

Clayton may just have that chance, as he’s rumored to be the next Bachelor.

The last group date of the season took Michelle and six of her suitors to a farm, where they milked cows, bottle-fed calves, churned butter, cleaned up cow poop, and went on a hayride. Joe impressed throughout the day, which came to make sense later, when he revealed that his grandparents own and ran a dairy farm.

At the nighttime portion of the date, Nayte told Michelle that he’s “never felt” like he wanted to bring someone home, but that he’s “definitely falling” for her and wants to do just that.

“I feel very strongly about you,” Michelle replied. “I’m really tumbling down a hill so fast falling for you as well.”

Rick and Rodney expressed their want to take Michelle to their hometowns, too, before things turned to Martin. In front of the men, he lamented his last conversation with Michelle, in which he blasted women for being high-maintenance, and said that the Bachelorette “perceived everything a little bit incorrectly.”

He also suggested that her vulnerable poem implied there was “trauma” in her life that she had yet to “work past,” which he found to be “immature.” Olu took offense, and filled Michelle in on Martin’s comments. She thanked Olu for his candor, before pulling Martin aside to have a chat.

While speaking to Michelle, Martin denied making the “immature” comment, as he continuously interrupted Michelle.

“You haven’t been honest,” she said. “You haven’t listened to why I’ve been hurting. My red flags are up. My walls are up. I have to follow the fact that I don’t trust you right now, and so I have to walk you out.”

Though Martin appeared to take it well in front of Michelle, as soon as he was being driven away in the car, he blasted the teacher.

With Martin gone and forgotten, Michelle awarded the group date rose to Nayte.

Brandon Meets the Parents… in a Hot Tub

Brandon was “stoked” to nab the second one-on-one of the week, and had a blast as he and Michelle got ice cream and made their way to her childhood home. The pair looked at pics of Michelle as a kid and kissed on her childhood bed, before she gave him one of her dad’s swimsuits to wear during a dip in the hot tub.

Their steamy makeout session was interrupted when Michelle’s parents got home early, but after some initial awkwardness, Brandon seemed to impress the two people who know Michelle best. He even asked to speak to the duo sans Michelle, and received their blessing to propose to the teacher.

As the pair headed to the nighttime portion of their date, Michelle told the cameras that the date was “one of the most special days” so far, and said that she could see how Brandon “fits into the Young family.”

Having met her family, Brandon expressed excitement at the possibility of Michelle meeting his parents and brother, but sadness over the fact that he’d be unable to introduce her to his late grandpa. The emotions ramped up when Brandon gifted Michelle a bracelet that his mom gave him before The Bachelorette, and instructed him to give to the girl he believes to be the one.

“I’m falling in love with you,” Brandon told Michelle. “I know it’s been so quick, but I’m not going to leave here today without telling you my true feelings.”

As she offered Brandon the rose, she told him, “I can see you being my best friend,” before admitting in a confessional, “It’s very possible that I could fall in love with Brandon.”

After the week of dates, Michelle had made her decision about the four men she wanted to continue on with, so she canceled the cocktail party. She awarded her final two roses to Joe and Rodney, thus sending home Rick and Olu. The former lamented the “painful” exit, while the latter was “shocked” by Michelle’s decision.

In the preview for next week’s hometown episode, Joe, Rodney, Brandon, and Nayte, the first final four in franchise history to be people of color, pull out all the stops.

One of Rodney’s family members says, “I don’t think I’ve ever seen you this happy,” while Brandon wants to show Michelle “a whole different side of me,” Joe invites her to prom, and Nayte promises, “I’m crazy about you.”

It won’t all be rainbows and butterflies, though, as one family member admits, “It brings tears to my eyes that he could be heartbroken,” and an emotional Nayte says, “It turned into this whole family dynamic.”

Elsewhere, Michelle sees “a red flag” as a family member tells Michelle that one of her suitors isn’t ready to get engaged. The emotions of everything leads Michelle to admit, “I feel nauseous.”