‘The Flash’: Brandon Routh on Returning to the Superhero World in Season 8 Premiere (Exclusive) 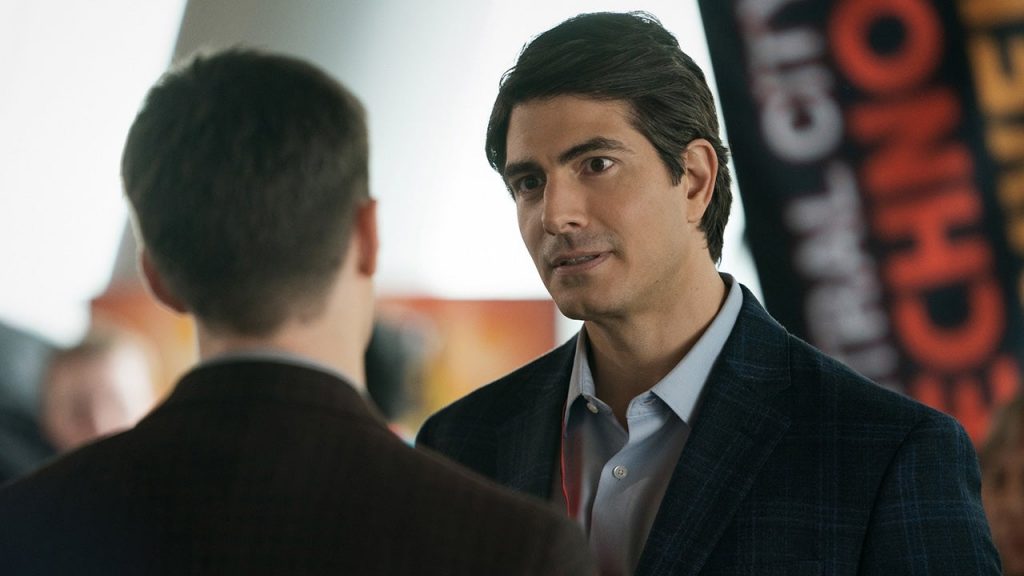 Brandon Routh didn’t think a return as Ray Palmer, aka Atom, would happen on The Flash, let alone as the kick-off to a five-part “Armageddon” crossover event. Routh left DC’s Legends of Tomorrow after five seasons in 2020, mainly due to creative reasons to wrap up his character’s storyline. So when the call came this summer that The Flash was interested in welcoming him back into the fold in a crucial way, Routh was more than game to explore what Ray’s been up to since he left the Waverider and began a new life with Nora Dahrk.

“It was really an opportunity to tell more of Ray’s story and what he’s been up to. So I was very excited about that and then I felt very honored that they would think of me to kick it off and to be a part of it. I was also excited about the opportunity to get back into the suit a little bit and to bring Ray back to the screen,” Routh told ET over the phone on Monday. The 42-year-old actor described Tuesday’s episode as “a great kick-off for ‘Armageddon.'”

“Setting up Despero and setting the stakes very high for Barry and what he has to do. And it’s just the beginning as Team Flash figures out how to deal with Despero,” he previewed. “It gives you a lot of great comedy, but also lets you know that Despero is for real, is a real deal and that Barry’s going to have to upgrade all of his skills or many skills in order to take down Despero in the end.”

Ahead of the new season of The Flash, Routh discusses coming back as Ray, what he’s been up to all this time and, with holiday TV season in full swing, a brief reflection on the classic Hallmark Channel movie, The Nine Lives of Christmas (and the upcoming sequel!).

ET: What brought you back into this world?

Brandon Routh: We got a call in June from my representative saying there was interest in me being in the first episode of season 8 [of] The Flash. And I didn’t really know the “Armageddon” component necessarily, but then I got on the phone, had a really nice Zoom call with Eric Wallace, the showrunner of Flash, telling me all about the epic event and how they were going to bring Ray in and find out all about what Ray and Nora’s been up to… and that it wasn’t just a quick hit of, “Hey, Ray was here for a second.” The episode is largely about Ray and diving into his story. It was really an opportunity to tell more of Ray’s story and what he’s been up to. So I was very excited about that and then I felt very honored that they would think of me to kick it off and to be a part of it. I was also excited about the opportunity to get back into the suit a little bit and to bring Ray back to the screen.

Did it surprise you at all that the opportunity to play Ray Palmer again came up in this context?

I was certainly surprised that it was Flash that called first and had it be as big as it was. To be showcased. [It] really is kind of a nice showcase episode for Ray, which is why I was honored by Eric and the writing team and the rest of the producers over there for thinking of me and Ray in this way. I thought if ever Ray would be back, it would be on Legends at some point, so to have it be Flash was very surprising and very exciting.

When Ray left the Waverider, he got married and decided to start a new life. We’ll find out what he’s been up to since, but what may surprise people about what Ray’s been up to when he’s reintroduced on The Flash?

I don’t know if it’ll surprise them that much, but, as I’ve played Ray the last six, seven years, he’s on this continual journey of, “What is it to be a hero? Am I doing enough either as a hero or as a scientist or as a human on Earth to better the species and helping society?” He kind of goes back and goes, “Well, I’m going to be a hero and I’m a hero because of the suit or I’m a hero without the suit, or I can do both.” I think this is another cycle of that for him, where having left the Waverider, he has re-energized his science background. He dove into the science and learning and research and has not been participating in being the Atom so much anymore. Coming into this episode of Flash, it’s kind of a reawakening and re-envisioning for him about what he thinks is a balanced life. He thinks he’s rebalanced his life, but is it for the better or is he still off the mark a little bit?

How is this crossover event different from others you’ve been a part of in the Arrowverse?

This was on a smaller scale as far as the amount of cast in each episode, but still had, I think, a big scope and epicness that fans are really going to love in this five-part crossover. And what’s cool about this is each of the five special guest stars. And then there are a couple other guest stars that come in, but they’re just not the main part of the episode. The five big guest stars that come in, the episodes are really about them. My episode’s really about Ray Palmer and then Black Lightning’s episode is about [him] and Mia Smoak. They’re a bigger part of each episode versus 10 superheroes having a little storyline intermixed in the whole bigger storyline. They’re showcase episodes for the guest stars, which is really fun and was exciting for me to be able to do because I always wanted to do more with Grant [Gustin] and we have a couple fun scenes. We didn’t always get a lot of scenes to work together that were more than two words, two lines.

Was there a moment on set where you were like, “This is really cool that I’m doing this again.” Did you have a bit of a pinch-me moment?

Yeah, there’s a scene, at least when reading it and then also performing it was fun too, where Ray kind of just shows up out of the blue in front of Iris and Barry, and interrupts their day and that’s fun because it hits on all of the fun Ray bits, where he’s very excited and lovable, but sometimes he’s a little bit socially inept about understanding that he is over-speaking or too loud. Or he’s not always following the social norms or paying attention to what he is doing because he is too caught up in the excitement of the moment. Those are always fun moments for me to portray. And then there’s also the stuff when Barry and Ray are facing off against Despero, where we’re having those buddy-buddy moments. The combination of humor mixed with tense action and drama really is fun to do. To break up the tension with those comedic moments is one of my favorite things. So, there are a couple moments.

Were you able to work with Cress Williams or Javicia Leslie or any of the other guest stars in your episode?

Just The Flash cast for me in my episodes. There are some surprises in future episodes of “Armageddon” where fun things happen, and I wished I was there. I had a great time working with Candice [Patton] and Grant and also Brandon [McKnight], who plays Chester. We had a lot of fun scenes together, Ray and Chester bonding moments. It was the first time they meet.

This leaves open the opportunity to come back at some point, but does this make it a little bit more tangible down the line for you to be back in the Legends world?

With it being the holiday movie season, I have to ask about Hallmark’s The Nine Lives of Christmas, which is a classic. Do people often message you or talk to you about that particular movie on social media?

I hear about that movie constantly all year round, because it plays year round. And at conventions… I have a picture of myself with Ambrose, the cat, and I find DVDs and soon it may surpass the top three things people ask me about or talk about, and that’s great. It’s a nice family movie that everybody can enjoy. It’s happiness. And we just did a sequel while I was up here in Vancouver, and it’s coming out on Thanksgiving, The Nine Kittens of Christmas. So we’re back, hopefully with as much fun, if not more fun in this sequel.

The Flash kicks off its five-part “Armageddon” event on Tuesday on The CW. For more, watch below.

‘The Flash’: Is Iris Pregnant? Breaking Down What’s Next for West-Allen and More in Season 8! (Exclusive)

‘The Flash’: Barry and Iris Will Renew Their Vows!