‘The Great’ Season 2: Gillian Anderson on Her Scene-Stealing Role as Catherine’s Mother (Exclusive) 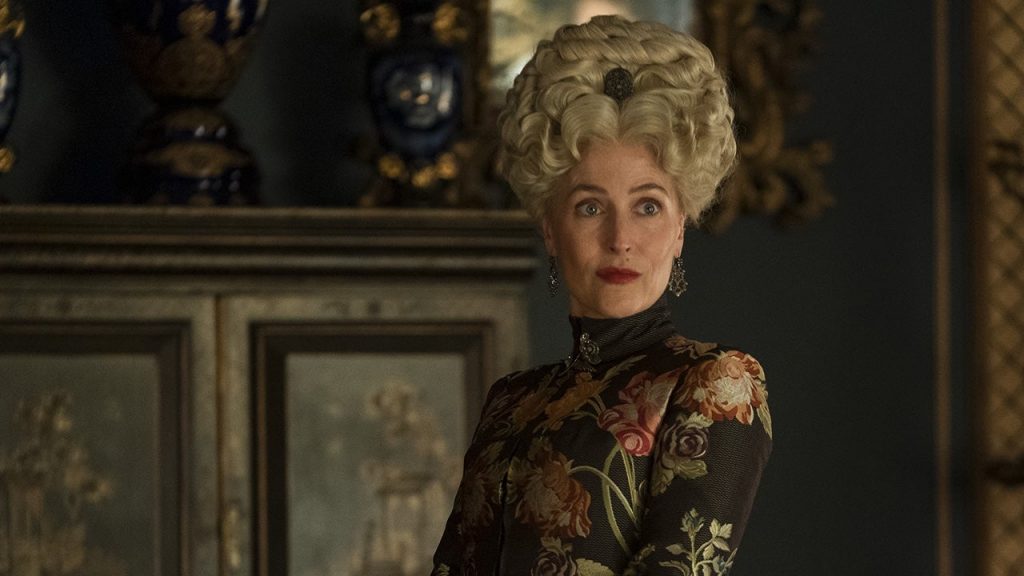 Lucky for fans, there’s been no shortage of screen time for Gillian Anderson, who has been enjoying an extended renaissance on TV with scene-stealing roles on The Fall, Hannibal and Sex Education as well as starring in the brief return of The X-Files. “I’ve been very lucky lately with the things that have come my way,” she tells ET.

Following her Emmy-winning portrayal of Margaret Thatcher on season 4 of The Crown, Anderson will undoubtedly earn awards season buzz for her brief, but unforgettable guest-starring turn as Catherine’s demanding mother, Joanna, on season 2 of The Great, which is now streaming on Hulu.

First appearing opposite Elle Fanning as Catherine and Nicholas Hoult as Peter III in episode seven, “Stapler,” Anderson’s character shakes things up for the dueling couple in an unexpectedly wicked way. “She’s used to controlling her daughters,” Anderson says of Joanna, who is known “as the maestro of marriage within the European courts because she has many daughters and she’s married them off very quickly.”

But now that Catherine has led a coup against her husband and has taken over Russia, Joanna’s unhappy with the way the news is disrupting her latest attempts to marry one of her daughters off to the King of France. “And so, she comes to have a look for herself and tries to convince Catherine that she’s making the wrong decision and that she’s just childish and all of her thoughts about women’s rights and etcetera are just nonsense,” Anderson says. Instead, “she should just focus on being a wife and having babies.”

While Catherine is pregnant with Peter’s son, Paul, and nearing her due date, she has not let that slow her ambitious efforts to bring the enlightenment to her adopted country — much to the chagrin of her mother, who is convinced all her ruling will lead her to miscarry and threaten her position in the palace. Later, in episode eight, “Five Days,” when Catherine excitedly tells her about her “massive diplomatic victory,” Joanna delivers a curt reply: “I’m thrilled. Bring me my dead grandchild when it falls out of you,” she says. (It’s worth noting this was also one of Anderson’s favorite lines.)

It’s that kind of biting tone and condescension that drew Anderson to the role in the first place. “[Creator] Tony McNamara and his gang are such good writers and all that type of irreverence is right up my alley. That’s essentially why I was interested in doing it,” says the actress, who had lots of fun playing these scenes opposite Fanning.

“She’s really fantastic, she’s so in the moment that she blushes when the character is embarrassed. It just takes over Elle’s whole body,” she continues. “Her enthusiasm for Joanna’s appreciation and her devastation at the little barbs that Joanna sends were just so comical and fabulous. It was wonderful to watch her react in these situations.”

Of course, Anderson’s time as Joanna wasn’t limited to working with Fanning. She also shares some wildly alluring scenes with Hoult as Catherine’s mother seduces her estranged husband. “It’s a very different dynamic,” the actress quips, not wanting to spoil “the specifics of the seduction.”

She adds, “It’s at the same time as being fun and light as it’s also cringey.”

While the situation Joanna finds herself in with Peter is gobsmacking, it sets up an incredibly funny and shocking exit that’s only topped by the infamous Sex and the City episode, “Splat.”

When asked about working with Anderson in the episodes, Hoult says he loved every moment of it. “Gillian’s a brilliant actress and she comes in just at the right point in the season, when everything needs a little injection of pacing — a catalyst — as they build toward the climax.”

“Gillian’s character is so funny the way she plays it,” Hoult continues, noting that Joanna is a tricky character to play, “because she’s manipulating everyone and working so many angles. And for Peter, he’s really trying to be on his best behavior and then this force of nature comes in and Gillian completely captures it.”

At the end of the day, for Anderson, Joanna was just so different from what she’s done before. “Jumping into that world is so different than from a world I’ve ever been in,” she says, explaining that doing The Great came right after The Crown and just before she went off to portray one of the first ladies of the United States in Showtime’s upcoming series, The First Lady.

“I went off to do Eleanor Roosevelt for about three months,” she says. “And so, the idea of having a chance to live in that completely irreverent, satirical world right before going into this historical, deep-facted [series] was essential for my state of mind to be able to play to that degree.”

And when it comes to reprising her role as Jean Milburn, a sex therapist and mother to Otis (Asa Butterfield) on Sex Education, which has been renewed for a fourth season on Netflix, Anderson says “that’s always something to look forward to.” While the series doesn’t resume production until the spring of 2022, “I’m really excited by the direction that it sounds like [creator] Laurie Nunn and the writers are going in terms of Jean specifically,” Anderson says. “So, yeah. Fun times ahead!”

The Great season 2 is now streaming. Want to watch more? The full series is available to binge on Hulu. (We may receive an affiliate commission if you subscribe to a service through our links.)

‘The Great’: Nicholas Hoult on Playing His Own Lookalike in Season 2 (Exclusive)

‘The Great’: Elle Fanning and Nicholas Hoult on Catherine, Those Sex Scenes and Season 2 (Exclusive)