‘The Great’ Season 2: Nicholas Hoult on Playing His Own Lookalike and Acting Opposite a Corpse (Exclusive) 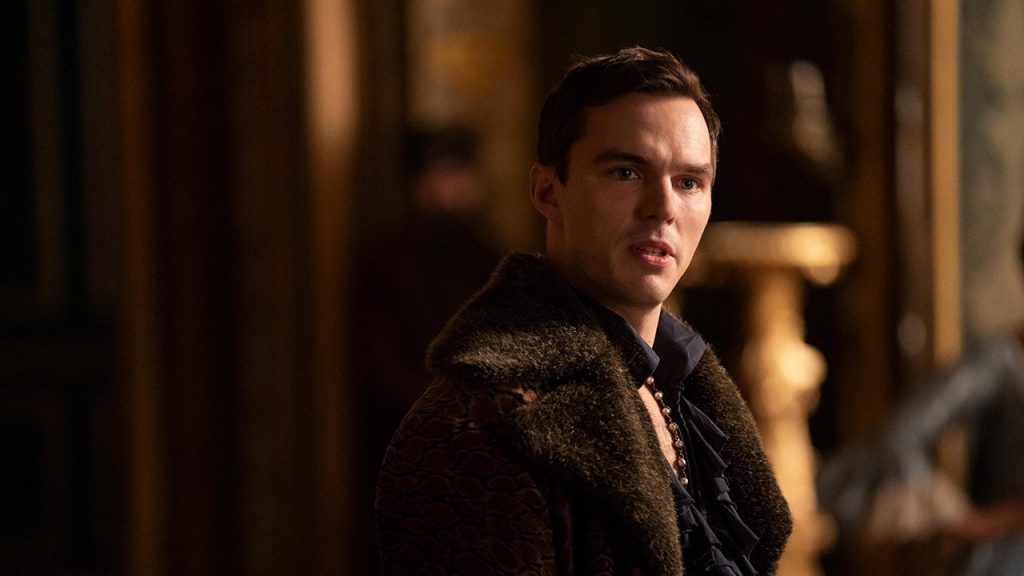 After its superb debut with season 1, The Great is back with another strong, if not funnier and raunchier season telling the not entirely true account of Catherine the Great’s rise to power in Russia and her tumultuous marriage to Peter III. Nicholas Hoult, who portrays the violent, sex-addicted and sometimes daft emperor opposite Elle Fanning‘s power-hungry empress, talks to ET about Peter’s attempts to win back his crown after hastily abdicating the throne to his pregnant wife and trickiness of playing his own lookalike in season 2.

Picking up months after Catherine launched her coup at the end of season 1, Peter is initially on the run. But because he’s not someone who necessarily strategizes or plans ahead, “Peter loses his whole empire because he gets too hungry and signs it over for a roasted ham,” Hoult says. As a result, for the rest of season 2, he’s a prisoner in his own palace.

Initially, Peter’s quite content with his life as a kept man. He’s relieved of the pressures of ruling over Russia and is free to indulge in various pursuits, such as learning karate, studying meditation or practicing the violin. “He’s quite happy being kept in the palace, getting to do all the things he loves, trying to better himself, and getting on with his life without the stress of being the emperor,” Hoult says, adding that “it’s only on in the season that he starts to feel that perhaps has been made to look like a fool or that he gave up.”

Once that notion sets in is when the real chess match between Peter and Catherine begins, as she’s forced to deal with his antics all the while she’s trying to bring the enlightenment to her adopted country. But complicating matters even more is the fact that Peter loves Catherine and seems hellbent on proving his worth to her, even if she’s not interested.

“He’s so in love with Catherine and it becomes a complex transition,” Hoult says, adding that “he’s never had to look at himself as a bad person before because of the way he’s been raised and being this leader, he’s been surrounded by yes people.” While he does give it a go, “and he really does do his best,” Hoult says. It’s not long before “he falls back into his old patterns.”

Because he continuously disobeys Catherine’s rules, she punishes him by locking him up in his room, leaving him with only his mummified mother for company in episode three (“Alone at Last”). “Because he’s someone who relies so much on other people being around him and supporting him and encouraging him, having to be alone is actually the worst thing possible and imaginable for him,” Hoult says.

Consequently, Peter slowly starts to go mad and confronts his relationship with his mother, which sees Hoult forced to act opposite a mummified corpse. “His mother was cruel to him and really scarred him psychologically and emotionally in ways that he has never recovered from, so that was really interesting for it then to be a part of the psychological warfare Catherine wages on him,” the actor explains.

He adds with a chuckle, “The climax of that was brilliant and also very comedic and ridiculous, ’cause you’re looking at a skeleton.”

While Hoult has delivered a standout, if not shamefully overlooked performance as Peter on the series, the episode really lets him shine. “I really loved it when I first read because Peter has been placed under house arrest and then put into isolation. And it was interesting just coming off the lockdown and being fairly isolated,” the actor explains. “It was just a brilliant episode.”

In addition to being put through the ringer as Peter in season 2 – there’s no shortage of antics or sexcapades for the character – Hoult also has the task of playing one of the emperor’s many lookalikes, Pugachev. In another example of the series playing fast and loose with history, Pugachev was a military commander who impersonated Peter and led a rebellion against Catherine.

However, on the series, he’s part of a season-long joke of Peter sending out lookalikes as decoys to be hunted down by Catherine’s army. And of course, Pugachev causes trouble of his own. “But this idea of having lookalikes and the comedy that can come from that was brilliant,” Hoult says, crediting creator Tony McNamara for coming up with the idea.

Admittedly, bringing Pugachev to life was something Hoult found a bit intimidating. “He was such a clear character in my mind and so precise in Tony’s writing,” the actor says. “But to start fresh in the same was something different and it’s been very interesting. The balance of creating two different characters in one show is very difficult because they’re side by side, the contrast is right there for people to examine and pick apart.”

At first glance, there’s something about Hoult’s appearance that verges on uncanny valley, in that it looks like him but isn’t quite him thanks to the subtly of the transformation. Hoult says the makeup team was “treading a really fine line with it because they had to transform me in a way that was enough removed but still close enough to appear that they could be confused for each other.”

While the makeup team made subtle changes, it sounds like anything but for the actor, who spent way longer getting ready as Pugachev thanks to fake teeth, stubble on cheeks, uncombed hair, reshaped eyebrows and adding red to his ear lobes, which always stood out to Hoult. “They had this checklist in the makeup trailer of things to do,” the actor recalls. “And I remembered, like, number 12 or 13 was ‘spread red in ear lobes,’ and it always made me chuckle.”

The Great season 2 is now streaming. Want to watch more? The full series is available to binge on Hulu. (We may receive an affiliate commission if you subscribe to a service through our links.)

‘The Great’: Elle Fanning & Nicholas Hoult on Catherine, Those Sex Scenes and Season 2

With ‘The Great,’ Elle Fanning Is Ready to Take the Throne (Exclusive)