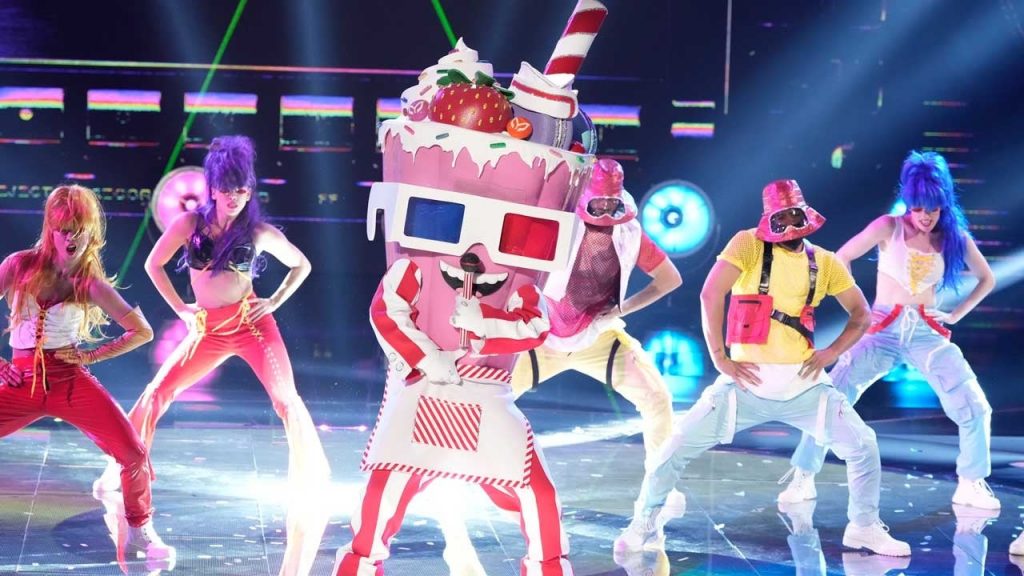 The Masked Singer returned for a special Sunday show with a fun, weird and wonderful tribute to the ’90s!

Stalwart panelists Robin Thicke, Ken Jeong, Jenny McCarthy and Nicole Scherzinger did their best to guess the secret identities of the night’s costumed contestants as host Nick Cannon introduced us to two brand new hopefuls — The Walrus and The Milkshake — who came to try and take on the returning champs, The Lambs.

All three clandestine celebs sang their hearts out, but only one was able to move on to the next round. Here’s how everything played out, and which characters ended up having to “take it off!”

The Walrus was the first singer to take the stage — decked out in a huge yellow fisherman’s raincoat and yellow hat, complete with a bird on his head.

He picked a particularly iconic early ’90s tune, “Two Princes” by the Spin Doctors, and it was a commanding, fun performance that transported the entire audience back to 1991 with some potent nostalgia.

“Oh my gosh, You are no joke. The competition this season just got that much harder – after that performance,” Nicole marveled. “You just lit a fire under ’90s Night!”

Next up, fans got a chance to meet The Milkshake! A charismatic performer — in a particularly top-heavy costume — that had the audience in the palm of his hand as he delivered a rendition of Sir Mix-A-Lot’s iconic party track, “Jump On It.”

“That is the most fun performance I think we’ve seen this season,” Ken gushed.

“I don’t know who you are. It’s driving me crazy. But you are a superstar,” Nicole added. “Like, for real!”

The final act of the night were the queens of the Muppets Night — the trio of songstresses known as The Lambs!

The talented flock of vocalists hit the stage and delivered a skillful cover of Alanis Morissette’s ironically not-ironic hit, “Ironic.”

“Oh, my gosh. Your voices are incredible. You sound like a record up there,” Nicole marveled. “You precious little Lambs are going to the semifinals with the crown!”

After all the songs were sung, it was time for the audience to vote on who would move on to the battle round, and whose Masked Singer journey was already at an end.

Despite a fun and charismatic performance, The Walrus was the first to get beached. After the panelists made their final guesses, The Walrus unmasked and revealed himself to be veteran TV star, Joey Lawrence!

Lawrence spoke with ET ahead of Sunday’s big show, and he opened up about getting the chance to perform anonymously inside a huge Walrus costume.

“That was my favorite part! You get to go out there and just be yourself,” he marveled. “It’s always great to get to perform live.”

However, he also admitted that the costume itself didn’t exactly make it easy to move and dance in.

“It was challenging, you sweat your ass off in there. But it didn’t bother me. It was almost like a challenge to see if I could even do it,” he explained. “If you’re gonna go on the show, you know what you’re getting into, so don’t complain about it. Because it’s supposed to be fun, and it is fun! That’s why I did it.”

After The Walrus’s unmasking, The Milkshake and The Lambs returned to center stage for the night’s musical showdown, which pitted both acts against one another by having them each deliver half of the same song, interpreted in their own way.

The Milkshake was up first and brought a fun vibe and flair to the iconic “What Is Love” by Haddaway. However, The Lambs brought some heartbreak to their unique and wildly original take on the famous tune, turning it into an emotional ballad that simply blew the audience away.

“This rendition, it is the most original cover of a song in a Battle Royale we’ve ever had on The Masked Singer,” Ken said in awe, calling the performance “transcendent.”

Despite giving it his best try, The Milkshake ended up getting tossed to the side, ending his Masked Singer journey. The Lambs were crowned champions once again, before the panelists were tasked with once again guessing his identity (all to no avail).

After struggling with his unwieldy costume, The Milkshake finally revealed himself to be NFL star Le’Veon Bell.