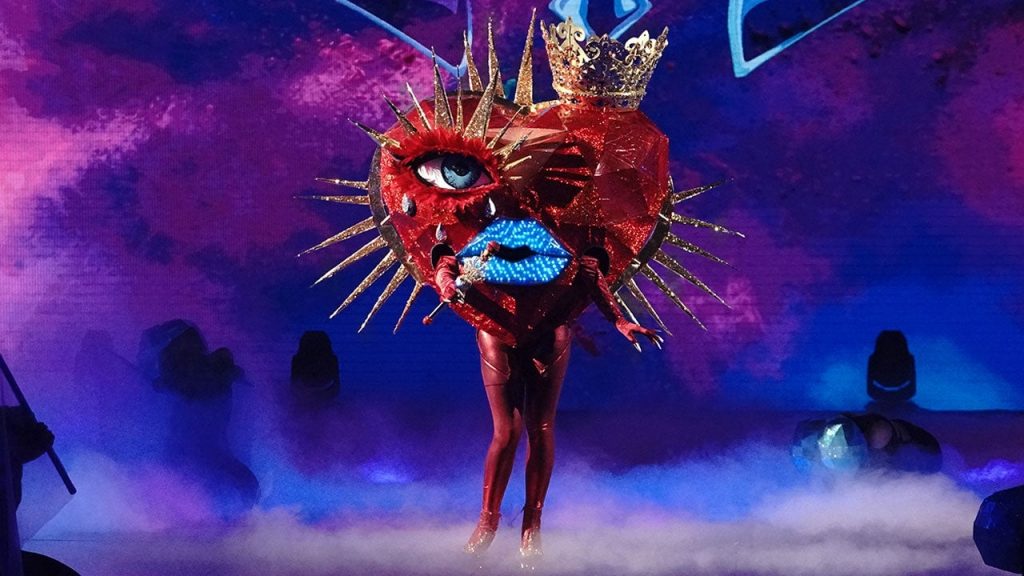 The Masked Singer returns on Wednesday, with exciting performances and new clues from Group B! ET will be following along throughout the entire show to break down all the biggest moments, best performances and most revealing clues from the Group B semifinals!

The show’s stalwart panel of celebrity “detectives” — including Robin Thicke, Nicole Scherzinger, Ken Jeong and Jenny McCarthy, as well as guest panelist Cheryl Hines — are all doing their best to figure out what celebs are under the elaborate costumes before they have to unmask.

This week, The Queen of Hearts, The Mallard, Banana Split and The Caterpillar will give it their all to wow the crowd and baffle the judges in the ongoing battle for the Golden Mask trophy. However, two contestants will be getting voted off and unmasked before the night is over.

The fun begins at 8 p.m. ET/PT on Fox, so watch and follow along as we delve into the glorious madness and bizarre, captivating chaos that is The Masked Singer season 6!

And the Unmasked Star Is…

Once again, the panel proves to be entirely incorrect!

“I can’t believe it! Your voice is incredible!” Jenny marvels.

“Thank you guys for being out there in the world and entertaining people. More than ever we need amazing people like you who make us smile. No matter how stupid some of the things you say are, they make us smile!”

After all the audience votes are cast, the second contestant going home is The Caterpillar.

And the Unmasked Star Is…

Wow, none of the panelists were even close to correct!

“It was one of the hardest things I’ve ever done,” Robertson shares, adding, “”Most of the people that you’ve named, I’m friends with!”

He closes out his Masked Singer journey with an unmasked rendition of “Fly” and it’s a lot of fun.

All the votes have been cast! So who’s getting the axe?

The Mallard is the first costumed contestant who will be getting revealed tonight!

The First Vote Is Here!

It’s hard to believe that two singers are going to have to go home tonight. It’s kind of a bummer.

However, at least we’re gonna get some answers!

We’re gonna have to wait until after the commercial to find out.

The Queen of Hearts Croons Another Classic

Whoever The Queen of Hearts really is, she’s an undeniable talent.

This week, she’s tapping into that classic nostalgia feel with a gorgeous rendition of “She’s Got You” by Patsy Cline.

Truly, her voice is next-level and the panel and the audience can tell just how much of a powerhouse she really is.

“You have a such a gift,” Jenny says. “What a beautiful voice.”

“This song represents that, if it don’t work out with a man, you thank God — because it means a better one’s coming,” Queen shares.

The trophy for The Queen of Hearts is the Blockbuster Entertainment Award.

“I’ve got to say, when I won it, I felt like a real leading lady,” The Queen of Hearts shares.

Cheryl says it could be Kristen Chenowith.

Nicole thinks it could be Sia.

The Queen of Hearts — New Clues:

The Queen of Hearts:

– Says, “I’m gonna lean into the one thing that hopefully sets me apart, and that’s me heart.”

– Says, “This next song reminds me of the best and worst time in my life.”

– Says, “Worst because a dream was ending. One I never thought would. But best because there I was on the other side of it, stronger than I thought I ever could be.”

For his performance this week, The Mallard plays up his English aristocracy look before a record scratch sound effect introduces the actual tune he’ll be signing — the decidedly non-aristocratic “Fly” by Sugar Ray.

“I’m so impressed with you,” Nicole says. “You’re so cool. I feel like we should all hang out on a lake or something.”

While it’s fun to hear him perform, the number itself feels a little underwhelming. It’s hard to know how this song will play when it comes to grabbing votes at the end of the night.

“Being known as fascinated has always been my true calling,” The Mallard says.

Cheryl says it could be George Forman.

Wow, Nick is 100 percent right when he says “this might be the craziest guess range ever.”

– Says, ‘The fact that I keep going is insane, because I am 100 percent the under-duck.”

– Says his kids “always groan at my dad jokes.”

– He reveals that he has “lots” of kids.

The Buzzer Has Been Hit

There’s no going back from this now. Jenny has pushed the button and is locked in.

She says she think’s it’s an Oscar winner.

She thinks the country music clues lead to Brokeback Mountain.

She thinks the references to signing with his sister could be Maggie Gyllenhaal.

That’s right! Jenny is inexplicably convinced that this is 100% Jake Gyllenhaal!

Robin doesn’t seem convinced at all.

Amid the chants of “Take it off” we find out—

“Yo! I could have told you it wasn’t Jake Gyllenhaal, ya’ll!” Nicole declares.

This means the buzzer if “officially retired for the season” after Ken wrongly guessed The Pepper was Sara Bareilles last week.

Jenny Calls for the Buzzer!

Jenny is SURE she thinks she knows who it is, and calls for the Take It Off Buzzer.

She’s so excited, and The Caterpillar is begging her not to.

Before we can see if she does — it cuts to commercial!

The Caterpillar Sings for His Friends

The Caterpillar is certainly showing off his range this week, crooning the Garth Brooks hit “Friends In Low Places” like a pro.

The tone of The Caterpillar’s voice is totally unlike anything he’s shown us before, and it’s clear how impressed (and confused) the panelists really are.

Sometimes more subdued songs aren’t hits with the audience, but certainly not in this case.

“I was expecting a sort of nerdy sounding person,” Cheryl admits.

“This award was a crowning achievement in my life,” The Caterpillar says. “But nothing comes close to when I received that VMA Award.”

That’s how you drop a twist in a big way.

Nicole thinks it might be Tyler Hubbard of Florida Georgia Line.

– Says, “I’ve never done anythign like this before, but I’m doin what I’ve done my whole life — fake it until you make it.”

– Says, “My mission for this next performance is to show some range.”

– Says he’ll be performing an “old country song” that he used to sing with his sister.

– Says it takes him back to where he grew up.

– Says, “When you fake it until you make it, and then you finally make it, it feels pretty damn good!”

Tonight, Banana Split is throwing us a real curveball. The number begins with The Banana at the piano, but as Ice Cream belts out the opening lines to Lady Gaga’s “Poker Face,” Banana walks over and starts banging away at the drums like a pro.

The Ice Cream is showing off a lot of her dance moves as she’s joined by cupcake-adorned backup dancers, and she owns the stage like a seasoned pop star icon.

There’s even an orchestral accompaniment that The Banana conducts — showing a wild range of different musical aptitudes.

Needless to say, the song is a big hit.

“Can I just say, what a way to open the show!” Jenny says. “It was absolutely incredible!”

Tonight’s bonus clue theme is “Bring your trophy to work day,” where the contestants show off a accolade they’ve earned that they are proud of.

For Banana Split, their trophy is… a whole bunch of trophies! Including one that says “Favorite Hottie.”

“Collectively, we have won quite a few awards,” The Banana explains. “But that one you pointed out, I’m particularly proud of.”

“Well, it’s pretty obvious who the hottie is,” he adds with a laugh, while gesturing toward Ice Cream. “It ain’t me.”

The Banana asks Ice Cream how she won that award, and Ice Cream says, “I don’t remember, and that could be the real problem.”

Jenny suggests it could be Ed Sheeran and Jessie J.

Robin thinks it could be Ryan Tedder and Leona Lewis.

Nicole guesses John Krasinski and Emily Blunt (although she cannot for the life of her say “Krasinski.”)

– Ice Cream says, “I think our strength is that we’re theatrical. We put on a show”

– Banana holds his fingers up in double Peace signs.

– Ice Cream says, “We want to throw them off with this song, so we’re channeling our inner pop stars.”

– Banana says, “It’s funny because one of us dreaming about being a pop star, but it didn’t really pan out.”

This Group B semifinals wouldn’t be complete without some additional star power on the panel.

This week, hidden at first behind a feather masquerade mask, is actress Cheryl Hines!

This marks her second time as a guest panelist on the show, following her appearance during the Group B finals in Season 4 last November. Almost exactly one year ago to the day.

The Group B Semifinals Are Here

Wow, this season is going so fast!

Tonight, we going to be seeing some of the best vocal talents in this competition duke it out, and I personally can’t wait.

We’ve also got another double elimination, meaning once again we’re cutting the competition down quite a bit as we barrel toward the season finale.

So who will be joining The Skunk and The Bull? I can’t wait to find out!

Check out the gallery below for a look at every single contestant who has ever had to “take it off” over the past five seasons of the show!

‘Masked Singer’: Pepper and Jester Get Roasted in Double Elimination

PrevPrevious‘Masked Singer’: The Mallard & The Caterpillar Get Pecked In Group B Semifinals Double Elimination!
NextBest TV and Movies to Stream: ‘The Shrink Next Door,’ ‘Carole Baskin’s Cage Fight’ and MoreNext