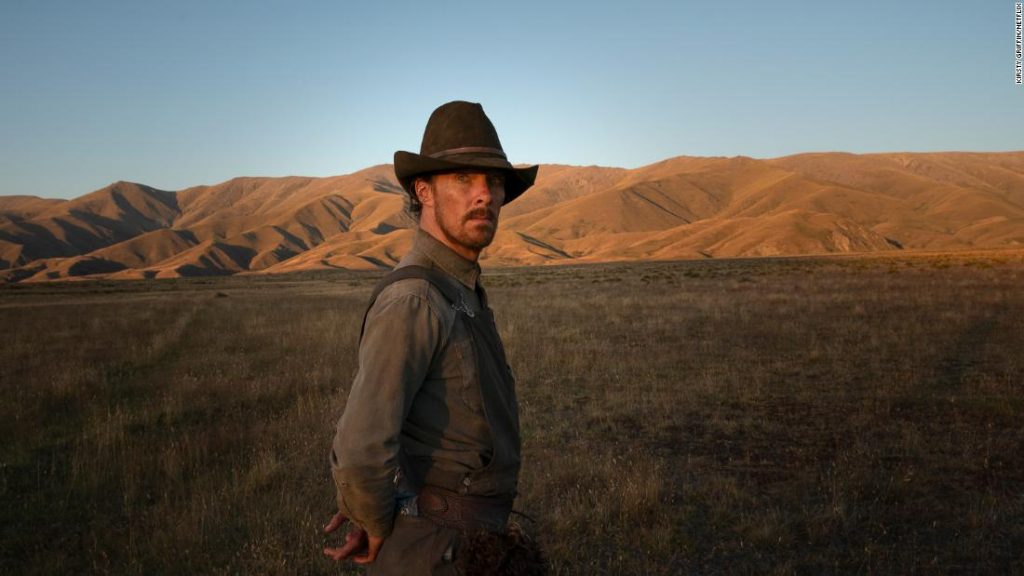 Share on facebook
Share on linkedin
Share on twitter
Share on email
Marking the first film in 12 years from the director (who did do the TV series “Top of the Lake” in between), Campion has adapted a 1967 novel by Thomas Savage, set in Montana during the 1920s. While the western tone and subject matter has drawn comparisons to “Brokeback Mountain,” the story feels distinctive, and owes as much to Campion’s signature movie “The Piano” with its strained relationships in a harsh, remote environment.
The central tension stems from the bond between two brothers, who have grown up together on the family ranch but couldn’t be more different. Phil (Benedict Cumberbatch) is tethered to the past and tradition, as well as vaguely sadistic in his treatment of his brother George (Jesse Plemons), a quiet sort who he persists in calling “Fatso.”
When George abruptly announces he’s marrying an attractive widow, Rose (Kirsten Dunst, again paired with her off-screen partner after “Fargo”), Phil responds terribly and treats his brother’s bride abusively. That discourteousness that also extends to her son Peter (Kodi Smit-McPhee), who Phil sees as being effeminate and cruelly teases along with the other cowhands.
Life on the ranch takes its toll on Rose, but she’s understandably concerned when Peter returns from school and begins spending time with Phil, who has seemingly taken it upon himself to make a man out of the boy, while reminiscing about his own schooling from a cowboy known as Bronco Henry. Yet his motives and virtually everyone else’s remain suspect, creating a sense of menace and tension that lingers throughout.
Read More
The cast is uniformly good, though Cumberbatch has the showiest role as the intense, brooding cowboy, who fears and resents change or any of the social niceties to which his brother aspires. When George hosts guests, Phil bristles at the suggestion that he should clean up before dinner, tersely announcing, “I stink. And I like it.”
Netflix clearly harbors awards aspirations for the movie, and the film earns a place in that conversation.
At its core “Power of the Dog” probes questions of masculinity filtered through the Marlboro Man images of the past, as well as how both vulnerability and reservoirs of strength can come from unexpected sources. Like a cattle drive, it’s an arduous process getting from here to there, but finally a rewarding one when the film reaches the finish.
“The Power of the Dog” premieres in select US theaters on Nov. 17 and Dec. 1 on Netflix. It’s rated R.