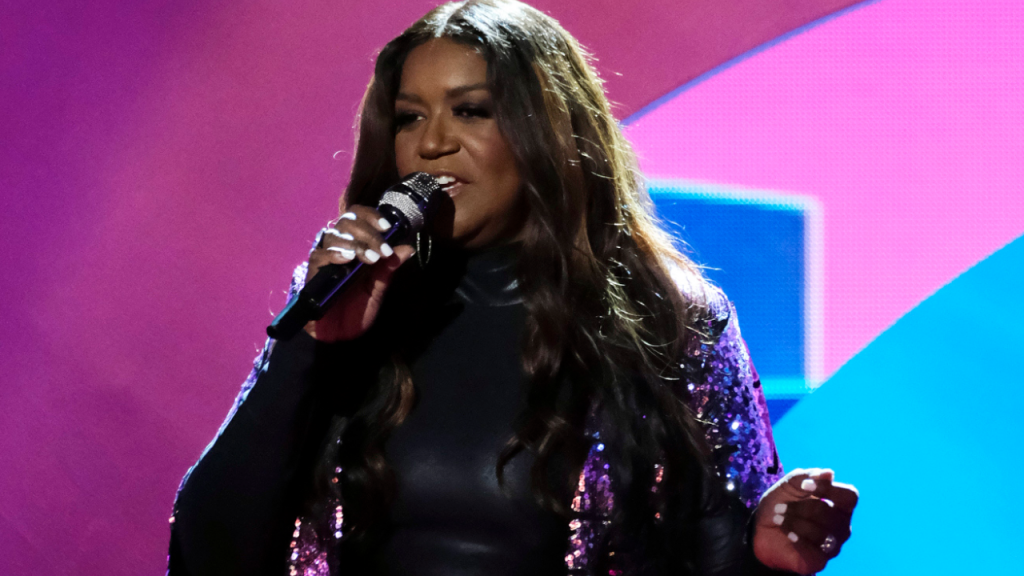 The Voice live Top 10 results show had a scary moment on Tuesday, as singer Wendy Moten fell and appeared to injure herself during the live broadcast.

The Team Blake Shelton singer had just completed her performance of “I Can’t Help Myself” with Blake and her teammates, Lana Scott and Paris Winningham, when she fell to the ground as the trio walked off stage.

The cameras cut away as host Carson Daly attempted to let fans know what was happening on stage.

“Unfortunate moment for Wendy Moten, who is walking off and we hope she’s OK,” Carson said as Wendy was helped off-stage by her coach and teammates as she clutched her arm.

Carson came back from commercial break with Wendy at his side, who assured viewers that she was A-OK.

“I’m OK, I’m a little bruised, but you know what? I’m still ready to go!” she exclaimed. Wendy, Lana and Paris all made the Top 10 during the show and will be moving on to next week’s lives.

Blake has made it no secret that he’s one of Wendy’s biggest fans this season. After landing the 4-chair turn to his team during the Blind Auditions, he has consistently declared that she is the most deserving singer he’s ever coached.

“I’m gonna say this, and I’m probably gonna catch a lot of heat for it, but I don’t care,” Blake raved of her Top 20 performance earlier this season. “I’ve been doing this show for 21 seasons, as a a coach, and there is nobody that I want this more for, ever, than you. You deserve this.”

‘The Voice’: Blake Shelton Says Wendy Moten Is the Most Deserving Singer He’s Ever Coached

PrevPrevious‘The Bachelorette’ Episode 6 Recap: Michelle Eliminates Half Her Suitors Ahead of Hometowns
Next‘The Voice’: Ariana Grande Sobs as Jim and Sasha Allen Are Saved From EliminationNext