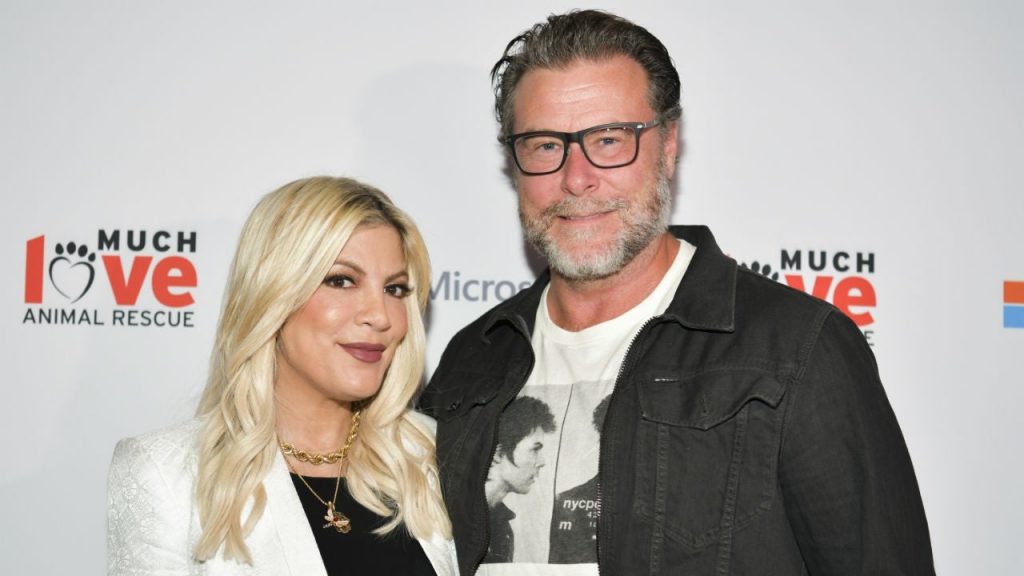 Tori Spelling shared her family holiday card on Monday on Instagram, which didn’t include her husband, Dean McDermott. The choice comes after a source told ET earlier this month that the couple was “struggling” in their marriage.

Spelling has also shared recent pictures of her and her kids spending Halloween and festive holiday time together, with no mention of McDermott.

Meanwhile, McDermott turned 55 years old on Nov. 16, and while he showed off presents from his children in his Instagram post in honor of the occasion, he didn’t mention his wife.

“I had the best birthday ever!!” he wrote. “The Fam made me feel so special and made me laugh with their awesome gifts. I have the most amazing kids and life. I’m so grateful. Happy Birthday to me!!! #happybirthday #55 #oldfart.”

Spelling and McDermott have been married since 2006. A source told ET earlier this month that the two were going through a rough patch.

“Tori and Dean do things as a family for the sake of their kids and live in the same house but sleep in separate rooms,” the source said. “Tori is more vocal about what goes on between them, and Dean is just completely checked out.”

“Tori isn’t dating anyone else, and they are trying to figure out the next steps,” the source also said.

According to the source, it’s McDermott’s alleged infidelities that have hurt the marriage most. McDermott has previously admitted to cheating on Spelling.

“Dean has been caught in so many lies and infidelities over the years and Tori is just over it,” the source said. “Dean does not want to get divorced because of financial reasons, and Tori doesn’t want to for the sake of their family.”

In June, Spelling opened up about no longer sharing a bed with her husband during her appearance on SiriusXM Radio Andy’s Jeff Lewis Live.

“You know what, right now my kids and dogs sleep in my bed,” Spelling said. “[Dean’s] in a room. Since he left, this is not good, you guys. But since he left, he was gone for six months filming in another country. They all stayed with me. So, I currently still have four in the bedroom with me who have yet to go back to their rooms. They have beds in there and two sleep in bed with me. And pets. Three dogs.”

Tori Spelling and Dean McDermott Are ‘Struggling’ in Their Marriage

Tori Spelling Recalls When Luke Perry ‘Went to Brawl’ for Her