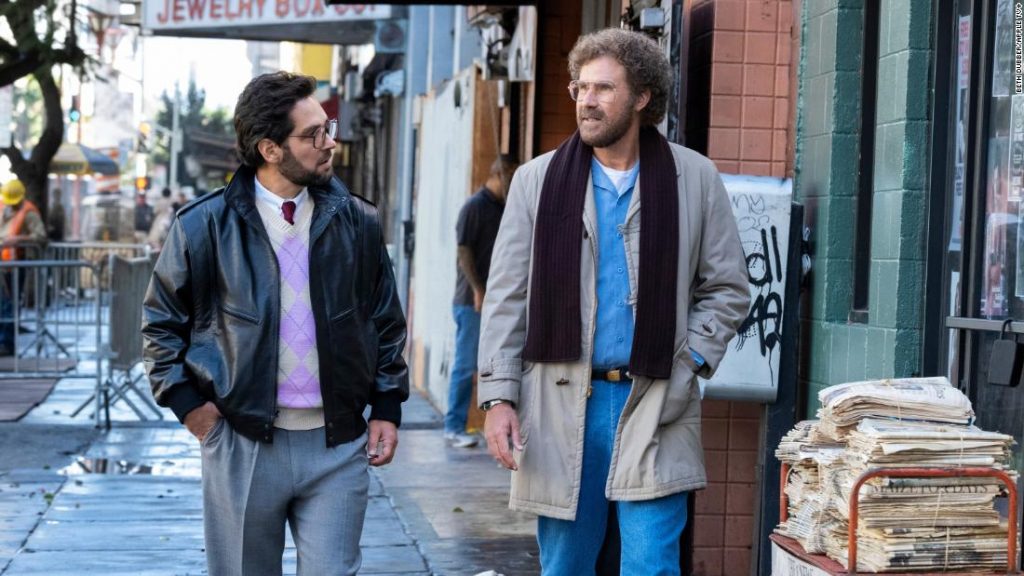 Share on facebook
Share on linkedin
Share on twitter
Share on email
Streaming, however, seemingly represents an ideal venue when it comes to allowing funny people to put on their tragedy masks, providing big names to help promote these content-and-attention-hungry services and showcases for the stars that don’t require delivering boffo opening-weekend numbers.
“The Shrink Next Door,” an Apple TV+ series starring Paul Rudd (the newly minted “Sexiest Man Alive”) and Will Ferrell, represents an example of this creative trend. It will be followed later this month by Netflix’s “True Story,” a limited series that features Kevin Hart in a not-huge-reach role — he plays a wildly successful comedian — who faces a serious crisis that includes his less-accomplished brother, portrayed by Wesley Snipes. The series comes in the wake of Hart’s dramatic turn in “Fatherhood,” also for Netflix, an actual true story about a widowed dad.
Based on a true story already turned into a podcast, “The Shrink Next Door” tells the strange tale of Marty Markowitz (Ferrell), who reluctantly agrees to see a psychiatrist, Rudd’s Dr. Isaac “Ike” Herschkopf, who quickly becomes his friend and gradually manipulates him into ceding control over his life and business to Ike.
It’s a slow burn (too slow, but hey, limited series tend to do that), as Ike begins by convincing Marty to throw himself a bar mitzvah as an adult before taking a position with his company and insinuating himself into every aspect of Marty’s life.
Read More
“He just has no boundaries, and I don’t trust him,” Marty’s sister, played by Kathryn Hahn, warns Marty, but by then, he has essentially fallen under Ike’s spell. Much of it involves Ike prodding Marty to lavishly spend money, reaping the rewards of that lifestyle.
Spanning decades, Ferrell bears little resemblance to the wacky characters with which he’s usually been associated. Ditto for Rudd, who portrays Ike as a flamboyant grifter who knows exactly what buttons to push to keep Marty in line.
Watching the series brought to mind those aforementioned examples, such as Murray starring in a 1984 remake of “The Razor’s Edge” to mixed reaction. Allen embarked on an entire new chapter in his filmmaking with movies like “Interiors,” “September” and “Crimes and Misdemeanors,” while Martin went dark in “Pennies From Heaven” and “A Simple Twist of Fate,” writing the latter.
Yet those roles all came in movies, when such films could still hope to find a toehold at the theatrical box office. Today, with the outlook for such projects having largely fizzled — a trend that preceded the pandemic, but which has snowballed since — streaming has become the most hospitable venue for comedic actors looking to flex their dramatic muscles.
Notably, “The Shrink Next Door” follows a dramatic movie that paired Ferrell with Julia Louis-Dreyfuss, “Downhill,” which headed in precisely that direction commercially. By contrast, the beauty of streaming, which seldom shares viewership data, is if people don’t show up no one will be the wiser that it flopped.
Indeed, half the battle for streaming services is simply getting noticed, and the Ferrell-Rudd pairing — with a timely assist from People magazine — is calculated to accomplish that. So the fact you’re seeing this story, and presumably others, means “The Shrink Next Door” has already delivered some kind of victory.
As for the actual size of that victory, your guess is as good as mine.
“The Shrink Next Door” premieres Nov. 12 on Apple TV+.

‘Yellowjackets’ has a bumpy takeoff

“Yellowjackets” looked promising thanks to the casting and concept, but the Showtime series feels like a disappointment in terms of shaping its twin-track plot into an equally compelling drama. The stars still merit a look, but the episodes made available don’t provide much incentive for those watching the takeoff to stick around for the landing.
Easy to shorthand as a sort of “Ladies of the Flies,” the show’s template appears to draw from the true story that gave rise to the 1993 movie “Alive,” about a boys rugby team that crashed in the Andes. Here, it’s a girls high-school soccer team whose flight goes down in the remote wilderness, forcing them to survive in near-surreal environs.
Created by Ashley Lyle and Bart Nickerson (“Narcos”), the series also focuses on these characters 25 years later, clearly living with the fallout of whatever transpired during their struggle to stay alive.
The elder-version casting is inordinately good, with Melanie Lynskey, Juliette Lewis, Christina Ricci and Tawny Cypress among those exchanging strained expressions and hinting at secrets that have been left buried.
Still, as is true of too many shows operating in this sort of serialized vein, “Yellowjackets” doesn’t seem to be in much of a hurry to get anywhere, and oscillating between the two time frames doesn’t help matters. It’s not so much that the story isn’t easy to follow as there’s not enough happening to make an investment in the mystery feel as if it’s worth the time.
As noted, the mix of elements looked more enticing than the result. Whatever the cause, “Yellowjackets” doesn’t crash, exactly, as much as it never really get off the ground.
“Yellowjacket” premieres Nov. 14 at 10 p.m. ET on Showtime.

‘Blade Runner: Black Lotus’ replicates the style, not the substance

The beautifully rendered backgrounds and soulless-looking characters perfectly capture the mixed bag that is “Blade Runner: Black Lotus,” an anime series trading off the name of director Ridley Scott’s 1982 sci-fi classic.
Premiering on Adult Swim, the series does an admirable job of replicating the dreary look of a perpetually acid-rain-soaked Los Angeles (this time circa 2032, so between the original and its sequel). It’s again a world of replicants and humans, but the connection to the films seemingly ends there, with the plot hinging on a young woman, Elle (voiced by Jessica Henwick), who awakens with no memory but who possesses mad fighting skills.
“How am I doing this?” she asks.
Answers come in gauzy flashback images and via a series of violent encounters, but “Blade Runner” is more about the look than the substance, which only goes so far. That’s despite a voice cast that includes “Succession’s” Brian Cox as (what else?) a ruthless tycoon.
Having seen three of the 13 episodes, this “Blade Runner” feels like a missed opportunity. And to paraphrase a certain cynical cop from the original, it’s too bad if the show doesn’t live, but then again, who does?
“Blade Runner: Black Lotus” premieres Nov. 13 at midnight ET on Adult Swim, which, like CNN, is part of WarnerMedia.

Now, Sandra Gonzalez with a dispatch from planet fandom.
“I usually reserve my sympathies for the dogs in those ASPCA commercials, but I couldn’t help feeling a little bad for ‘Bob’s Burgers’ EP Loren Bouchard this week.
Sunday’s episode of ‘Bob’s Burgers’ caused a stir among fans when bank robber character Mickey was unexpectedly NOT voiced by comedian Bill Hader. Bouchard explained on Twitter that “despite everyone’s best efforts, Bill Hader was unavailable to record” and since the animation had already been completed, they had to make alternate plans.
They ultimately chose to keep Bouchard’s voice as the character instead of finding someone who sounded like Hader, Bouchard said. You know, because TV is hard, Hollywood schedules are harder and we’ve all got deadlines. “We look forward to Hader’s eventual return,” he wrote.
A day later, it seems the response had not died down, prompting another reply from Bouchard. “Appreciate your passion. We’re gonna re-deliver (the episode) ‘Beach, Please’ with a more Mickey-sounding Mickey. Still not ideal, but will be a less distracting choice….Can’t do anything about the Hader of it all, but I regret that other decision.”
Who exactly was behind this “passion”? The Hader Hive? Mickey’s mouses? Unclear. But here’s hoping that the re-release is a little closer to what ‘Bob’s Burgers’ fans ordered. Otherwise, they’ll likely once again, want to speak to the manager.”