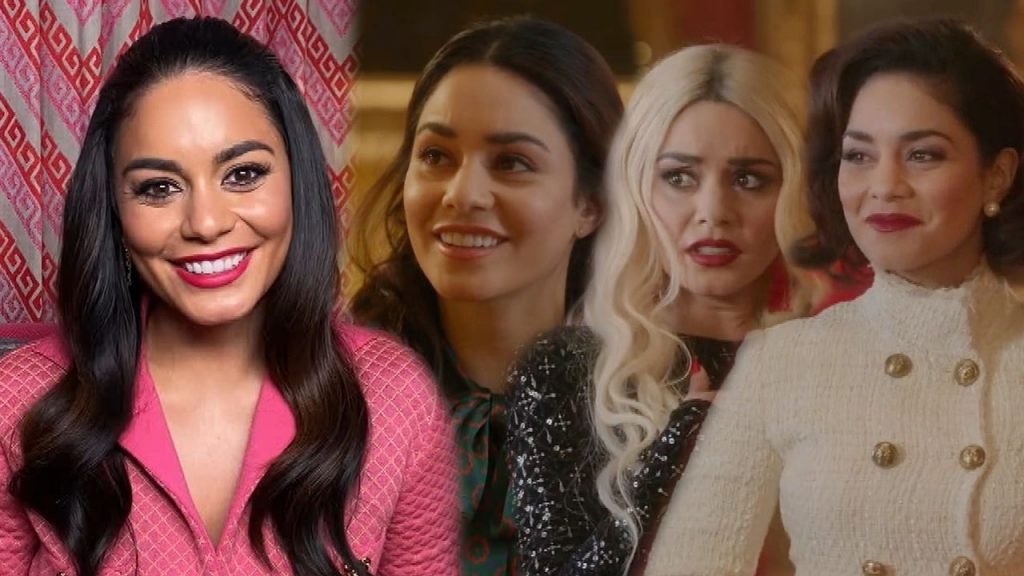 Vanessa Hudgens is beaming with pride over her new film, The Princess Switch 3: Romancing the Star. The actress has pulled off quite an accomplishment with the holiday flick, and opened up to ET’s Deidre Behar about the possibility of doing a Princess Switch 4 in the future.

“I feel very proud of it,” Hudgens said of the Netflix holiday romcom trilogy, in which she served as a producer and starred in as three different characters. “It was a little nugget that started from my love of The Parent Trap and now we are on the third.”

“It’s become this trilogy and to be a part of another trilogy, but know that it was literally just dependent on me because I was playing all the characters, is really cool,” she added. “And it feels like a really, really special accomplishment.”

The movie series — the first of which was loosely inspired by the classic tale The Prince and the Pauper — sees Hudgens playing Princess Stacy of Belgravia, Queen Margaret of Montenaro, and, in the third film, Margaret’s cousin, Lady Fiona Pembroke.

Looking back at playing to many different characters, Hudgens recalled, “The thing that’s most confusing about it, isn’t doing it, it’s talking about it.”

“So we would sit down and go over what we were doing that day. And man, I can’t tell you the conversations where it’s like, ‘But it’s Queen Margaret being Fiona and then Fiona,” and then everyone says it differently and it was a just a disaster.”

“It gets to a certain point where we’re like, ‘We’ll get there when we get there, never mind,” she added with a laugh.

Fans have been loving the installments and with the latest ambitious project coming out for this year’s holiday season, there’s already questions of whether or not a fourth film in the franchise could be in the works.

“You know, I never want to say never, but I definitely need a break from the amount of work that these movies take,” Hudgens admitted. “They’re so special and I love being in everyone’s home for the holidays and knowing that it’s bringing families together. It just fills my soul with joy. But it’s a lot [of work].”

One possible angle that fans have suggested could involve a royal baby, and Hudgens said, if that ended up being the route they take, “I feel like I would just want to skip the bump part and just be me holding babies, because God, I love babies.”

While she’s open to the idea of future installments in the fun holiday franchise, Hudgens says speculation about another take on the High School Musical franchise likely isn’t in the cards.

“It was such a beautiful moment in time that so many people do hold so close and near and dear to their hearts, that ,I don’t know. It’s scary to mess with something like that, because it is so beloved.” Hudgens suggests, “Someone’s got to write a script and send it to all of us, and if we like it, then who knows?”

Reflecting on her relationship with the baseball player, Hudgens said, “I’ve gone to a lot of games, way more than I have in my entire life condensed into a year. I love going and supporting and cheering him on. But for the premier days he’s like, ‘It’s game day, babe. It’s so nice. I get to come to your game.’ And I’m like, ‘Yes! Same thing.’ It’s great, he’s amazing.”

As for how this relationship feels different, the triple threat explains, “It’s just easy. We’re like the same person, very much the same person, but with different interests,” she added. “We have the same spirit, I think. We’re both just energetic. We want to have a good time, easy, goofy. It’s cool.”

The Princess Switch 3: Romancing the Star premieres Nov. 18 on Netflix.

Watch the New ‘The Princess Switch 3: Romancing the Star’ Trailer

Vanessa Hudgens Gets the Royal Treatment in ‘The Princess Switch’ — See the Pic!