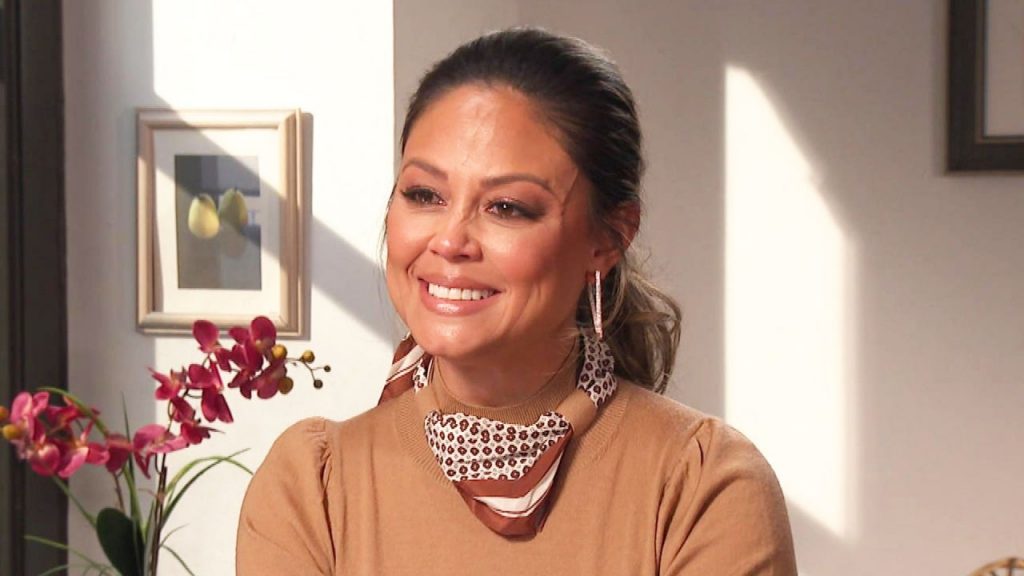 Vanessa and Nick Lachey have a sweet family tradition.

The NCIS: Hawaii star shared with ET’s Nischelle Turner the Thanksgiving promise she made her husband and has kept ever since, while chatting about her upcoming book, Life From Scratch: Family Traditions That Start With You.

“This drink is not in the book because it is an easy drink, but it started our traditions. So Nick and I, when we met 15 years ago, it was Thanksgiving night and I promised him, ‘I will always make Thanksgiving the best time for you,’ because it is his favorite holiday,” she shared. “So we came home that night, it was just us. We were dating and I was like, ‘OK, let me make you a cocktail.’ But if I am being real, I don’t know how to make cocktails.”

“So I am like, ‘A White Russian.’ My dad does not drink, but he had one drink every year on Christmas Eve and it was a White Russian,” she continued. “Just a box of Kahlua and a little bit of cream. So I walk in to the kitchen just to feel fancy and I made it. And three White Russians later we were decorating for Christmas and I am like, ‘Isn’t this cute? This is our thing now.’ So every year, I did it this year on Thanksgiving night, before the next day when we decorate, we toast a White Russian to each other.”

In Life From Scratch, Vanessa shares recipes, parenting tips and personal stories, including the strained relationship she has with her estranged mother, Helen Bercero. Vanessa’s parents separated when she was three, with her mother leaving their family years later without an explanation. Vanessa only saw her mom a handful of times in the past decades. Over the years, she’s struggled with wondering why her mother left her and her older brother, especially now as a mother of three.

“I struggle with my mom leaving because I look at these kids and Camden is the age when my mom left and there’s not a bone, an ounce, in my body that could ever just walk away from [them],” she said of her 9-year-old son, Camden, 6-year-old daughter, Brooklyn, and 4-year-old son, Phoenix. “I don’t understand it and that’s her story to tell to me one day then. But for her to have that piece of us forever and ever, no matter what and no matter where she is in her life, no matter how she feels about us [it’s hard to understand].”

Over the years, Vanessa said she has and hasn’t made peace with Helen leaving their family. “I’ve made the peace that I need to make to be able to speak about it and I think I made that peace because I now know the choices I’ve made as a mother and the things I will not do to my children,” she explained. “But I would be lying if I said it doesn’t still bother me and why it’s more fascinating than anything because she was the best mom until she left. She did everything for me. And my dad told me, she prayed and prayed she would have a baby girl and so all she wanted was a baby girl.”

“Did something happen that made you just shut out? That’s what I would want to know. But then you go back into [it and] you’ll just be harping about it for the rest of your life and you’re not moving forward, you’re holding on to the past,” she added. “So yes and no. Yes, it creeps into my mind curiously because you can’t help what thoughts come into your head. But you can help how you react to them and what you do about them. And I don’t react on them and I don’t hold negativity or grudges, and then I move forward in a positive way to break that mold and cycle for my kids.”

Nick, meanwhile, has been a huge source of healing and love for her. She shared how after all these years together, “We’re still earning each other.”

“He’s left everything willingly and supportively — everything to come support me now in this career doing NCIS: Hawaii — it is a full-time job, but so is being a mom and a dad,” she stressed. “So we’re still earning each other and I think that that’s gonna be, God-willing, knock on wood, the testament to us…is that we realize that. It’s not like you just fall in love, get married, and then everything is fine. People evolve, I’m different…I’m still in love with him but I’m a different in love than I was 15 years ago.”

Vanessa continued to praise the 98 Degrees singer, adding that Nick is a “dad who is present and a husband who loves you more than anything in the world.”

“I got it more and more in the past 15 years now, Nick and I have been together 10 years married, I am finally at this place where I am solid and comfortable to open up and say it is really empowering,” she said of sharing her stories in her new book. “And I know I keep using that word, but it really is.”

Life From Scratch: Family Traditions That Start With You is out Tuesday.