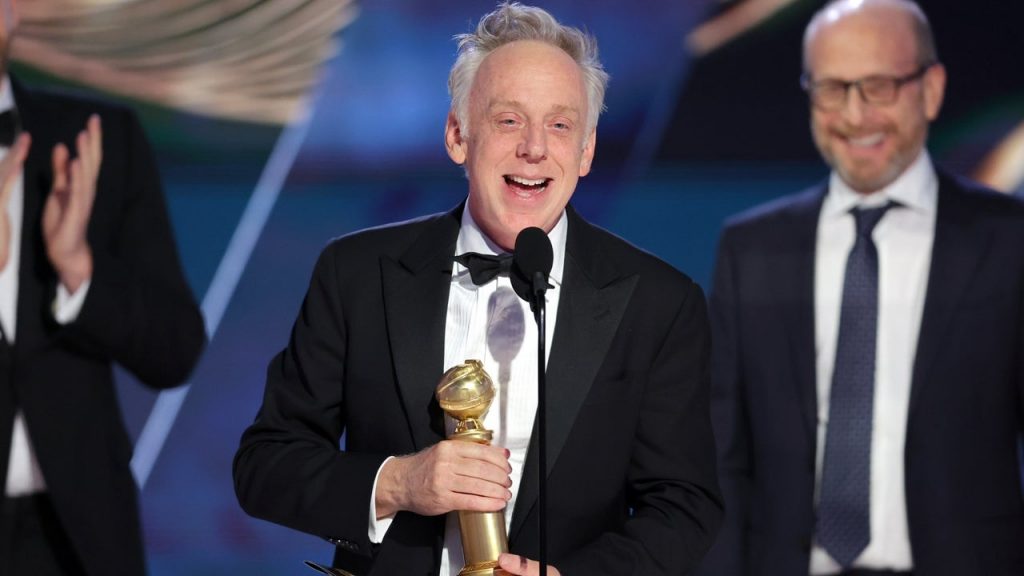 Cue up that unforgettable theme song, The White Lotus just won big at the 2023 Golden Globes!

Creator Mike White took the stage along with the show’s cast and crew to accept the award, quipping that he was “still choked up” over Jennifer Coolidge‘s acceptance speech for Best Performance by an Actress in a Supporting Role in a Limited Series, Anthology Series or Motion Picture Made for Television.

Coolidge thanked White profusely in her speech, saying he had given her a “new beginning.”

“I was going to give this speech in Italian, but we’re too drunk because there was no food,” White joked. The second season of The White Lotus took place in Siciliy, Italy.

White also thanked his ensemble of actors, and then singled out Coolidge again. Coolidge was the only actress to appear in both installments of the show’s two series.

“Jennifer, I love you,” White said. “We went out with a show that we wanted to do and everybody passed.” White pointed across the audience of actors who laughed at the joke and continued, “Everybody passed, I know you all passed.”

White went on to give a shout-out to F. Murray Abraham and the HBO executives who accepted the award with him. “I would take a bullet for you guys,” he said. He also added special thanks to the show’s Italian crew.

“Our Italian crew,” he said. “Our crew was amazing, you had to be there. I love this crew, I love all our designers.”

The White Lotus was renewed for a third season back in November, with White telling Deadline that he can’t wait to explore more stories at another one of the resort chain’s international locations — and plenty of the cast from both seasons 1 and 2 telling ET that they’d love to return for more fun and intrigue.

“I think it’d be fun to maybe go to a whole different continent. You know, we did Europe, and maybe Asia, something crazy like that, that would be fun,” White mused.

‘The White Lotus’: Signs You Missed About Who Would End Up Dead

‘The White Lotus’ Renewed for Season 3