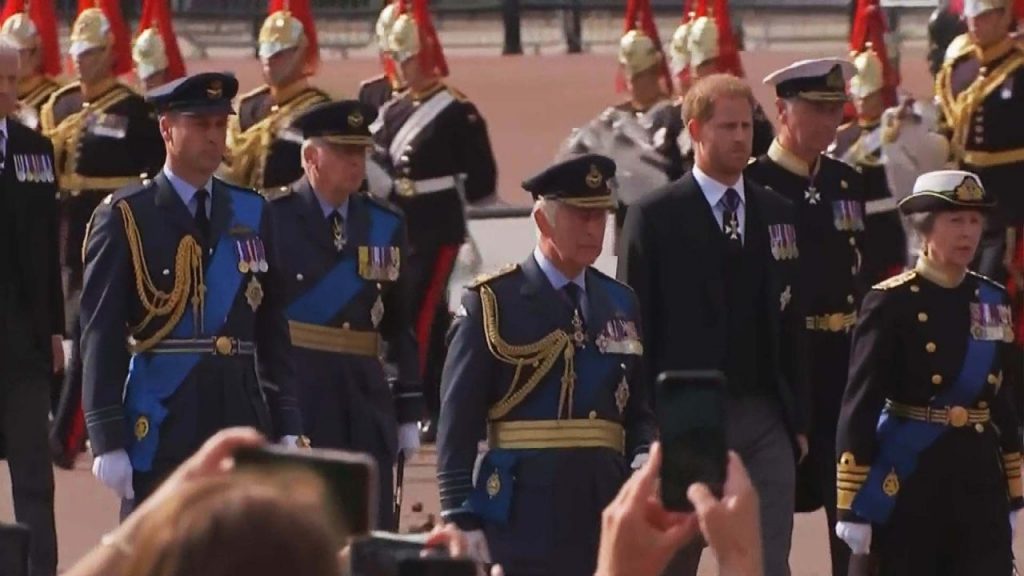 King Charles is considering the importance of each of his family members having royal titles. According to royal expert Katie Nicholl, the matter of royal titles is “enormously important” to the new monarch. As for how this affects two of his granchildren, Archie and Lilibet — Prince Harry and Meghan Markle‘s children — remains to be seen.

“We’re told by the palace the issue of titles is going to be something that is going to be sorted out after the official mourning period,” Nicholl tells ET, noting that “the royals have a further seven full days of mourning after the funeral on Monday.”

Unlike Prince William and Kate Middleton’s children, Prince George, Princess Charlotte and Prince Louis, Meghan and Harry’s children were not born with the HRH titles.

Prior to Queen Elizabeth’s death, Archie and Lilibet did not get titles because they were not the heirs to someone in the immediate line of succession.

Still, the decision for Archie and Lilibet’s title change has yet to be made, and can possibly be tricky, considering their parents officially scaled back from royal duties in 2020.

“Archie and Lilibet are not Prince and Princess Archie and Lilibet yet, they are still Master and Miss. Because I think a formal decision hasn’t been taken yet as to the announcement of those titles,” Nicholl adds.

“Are they going to be HRH? It’s unlikely, given that is what Harry and Meghan have dropped. But I believe that it’s the case that they will be prince and princess.”

One very important issue close to Harry and Meghan that could be solved if their children’s titles are changed is security. Nicholl shares that if Archie and Lilibet are bestowed titles, it would be easier for the couple to have protections covered in the UK.

“I think one of the key issues for Harry and Meghan, who we know very much want a below-the-radar lifestyle for their children, was security,” she adds. “That, of course, comes with being an HRH — it means that every time Harry and Meghan come over here with their children they get taxpayer-funded royal protection security.”

The issue of security for his family has been an ongoing concern for Harry, in particular. “Harry has appealed to the British home office to be able to pay for the right for that royal security something that has been turned down and something which Harry plans to challenge through the courts here in the UK.”

According to Nicholl, Harry and Meghan’s status does warrant security, but the people in the UK are divided on using their taxpayer dollars to fund it.

“I’ll say, given the fact that they are two of the most famous people on the planet, I think it’s fair to say quite divisive,” she tells ET.

“They have a case in point for security. A lot of people here believe because they’re not working royals, they’re not entitled to taxpayer-funded security. They’ve made plenty of millions of their own, they should be spending that on their private security.”

PrevPreviousThe Best Amazon Deals on Roomba Vacuums
NextPat Sajak Reflects on Hosting ‘Wheel of Fortune’ for 40 Years: ‘The End Is Near’ (Exclusive)Next