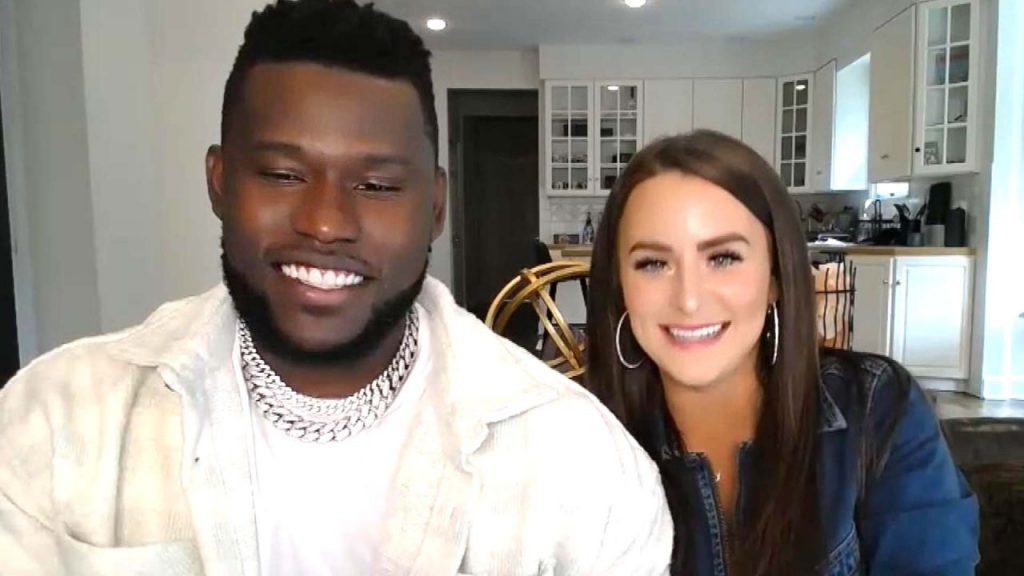 Leah Messer‘s future husband, Jaylan Mobley, understands that in marrying her, he’s joining her whole family. The 30-year-old Teen Mom 2 star and her new fianc? spoke with ET’s Deidre Behar about his romantic proposal, their wedding plans, expanding their family and why he’s been in touch with the fathers of Messer’s three daughters.

Jaylan popped the question in Costa Rica back in August, putting a lot of thought (and sneaky questions) into finding the perfect ring.

“I wanted to take my time. I wanted to be right,” Jaylan tells ET. “I wanted to ask her a lot of questions without her trying to know what was going on. That was a challenge. But I mean, the process was amazing. A little bit stressful at times because you’re trying to make sure that everything is perfect, but it was all worth it in the end.”

In addition to getting Leah a ring, Jaylan also got his three future stepdaughters promise rings. Leah shares twins Aleeah and Ali, both 12, with ex Corey Simms, and daughter Adalynn, 9, with ex-husband, Jeremy Calvert.

“She had no idea up until the point that I was going to plan something for the girls. I told her I wanted to do a picnic-type thing for them, and it was kind of surprise for all of them to see me not only make the promise to their mom, but to them as well,” Jaylan explains. “And they absolutely loved it.”

While he reached out to the girls, Jaylan also connected with their dads, making sure they were all on the same page as he joined the blended family.

“Actually, me and Corey went, we went golfing, and we actually had a discussion about it,” Jaylan shares. “And he was all good with that. And I’ve also had discussions with Jeremy throughout and after, and he’s always been like, ‘Hey man, I’m just glad you’re the one that’s in my daughter’s life, as becoming that stepdad.’ And so for me, that’s just another thing, too, is that when I came into her life, I was like, I wanted to make sure that I had a relationship with their dads, and that’s been amazing, too. And they’ve been all for it. They have been also giving me a lot of wisdom from things that they learned, and so it’s just all been kind of a working thing.”

Leah notes that fans will get to see these talks on Teen Mom: The Next Chapter.

“We actually film some scenes with me and Corey hanging out, and so it is just all good,” Jaylan says. “It all feels right.”

Leah is happy with the family’s co-parenting relationships when it comes to their daughters.

“It feels great that we can co-parent together,” she gushes of her relationships with Corey and Jeremy. “Just the other day Corey was here, and we were talking about different things with the girls becoming teenagers, how are we gonna work together as a team? And of course, [Jaylan was] a part of that conversation, and it feels great.”

The couple also wants the girls to be involved in their big day, which they plan to have in the summer or fall of 2023.

“I think Ali and Aleeah will definitely be bridesmaids, junior bridesmaids,” Leah shares. “Ali really wants to be a part of doing the makeup. Doing the makeup, she really does an amazing job. She’s very artistic like that.”

Aleeah also has a hand in helping her mom pick out her wedding dress.

As for Aleeah, Leah is hoping her daughter will lend her music talents to her special day.

Originally Leah admits she was planning to have a small, intimate wedding, but that’s since changed.

The couple has several must-haves for their wedding day, including an “untraditional” request from the bride.

Jaylan’s must have is “a good DJ and a dance floor” and the couple agrees that good food is another must.

They haven’t decided yet whether the wedding will be televised for MTV or kept private.

“I would, absolutely, yeah, under certain circumstances. Honestly, everyone that has watched my story unfold for years now, 13 years, I would love to them to see,” Leah says. “They saw the lowest moments. This would be my highest moment. When I say that, this would be my highest moment. To not be able to share that with everyone, it wouldn’t be ideal. It would not be ideal, but I mean, again, it would depend under certain circumstances. That’s our big day. We want nothing but joy, laughter, family.”

And speaking of family, will Leah’s brood be growing once she and Jaylan tie the knot?

“Yeah. The girls want us to have another girl,” Leah says. “I’m definitely open to it. I’m open to it now.”

“Boy or girl, I’m cool with it,” Jaylan says, though he admits to being wary of another set of twins. “Yeah, I’m a twin. She’s had twins. So I’m like, we may be asking for more than we can handle. So we’ll see.”

Teen Mom: The Next Chapter airs Tuesdays at 8 p.m. ET on MTV.

PrevPreviousThe Best Lululemon Deals: Align Leggings and More Are on Sale Now
NextJesse Williams’ Ex-Wife Seemingly Calls Him Out in Message About ParentingNext