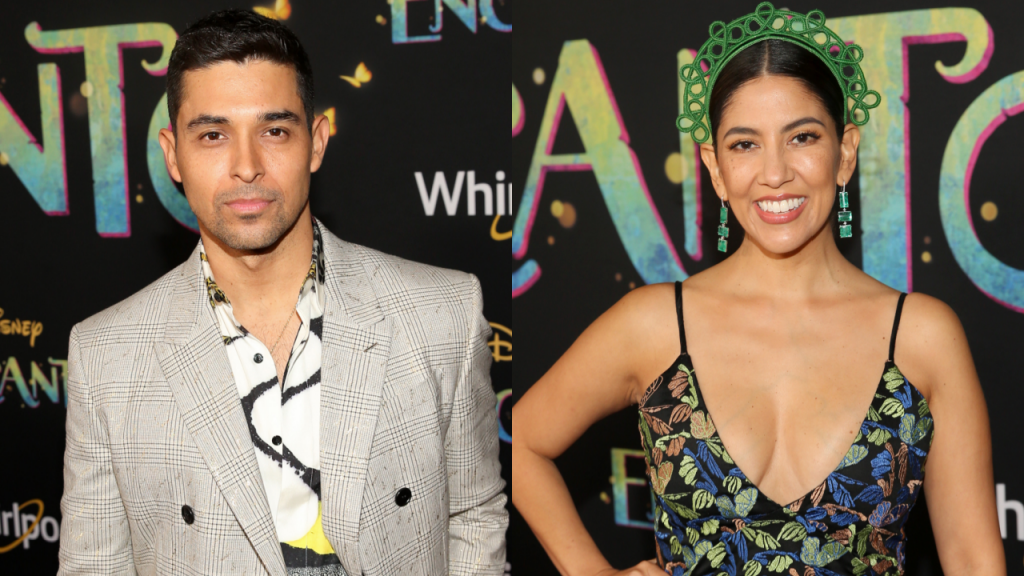 For Wilmer Valderrama and Stephanie Beatriz, Encanto is not only a movie they’re proud of being a part of, it’s also one they hope will be extra special to their children.

The first-time parents form part of the new animated Disney movie, which follows the Madrigal family, who live in a magical home in a magical town called Encanto in Colombia. Each member of the family has their own unique magical ability, except for Mirabel (Beatriz), who goes on a journey to save her family’s special powers. With original songs by Lin-Manuel Miranda, and an incredible cast of Latinxs, Valderrama and Beatriz, both of Colombian descent, are emotional over sharing the tale with their children.

“I keep going back to feeling emotional. When we watched the film…you get hit back to back to back with heritage, history, sacrifice and the resilience of a family,” Valderrama told ET’s Matt Cohen. “And I hope when she gets old enough to understand, this movie came at a crossroads of our cultures, for all the immigrants, to all the families of the world really, that all of us can relate to that journey itself.”

The actor welcomed his first child, daughter Nakano, with fiancee Amanda Pacheco in February. While he was born in Miami, he moved to his father’s native country of Venezuela when he was three, and later to Colombia, where his mother was born, before returning to the U.S. at the age of 14.

“I think we’ll remember this movie later as one of those films that set the bar so high and interpreted culture onscreen, that I hope it creates a parade of amazing stories that explores all the different cultures that we should discover, learn from and appreciate,” he continued. “I hope that she sees this as like the beginning of whoever she wants to be as she gets older.”

For Beatriz, whose parents are Colombian and Bolivian, she said sharing this story with her daughter is “so dope.” The actress welcomed daughter Rosaline with husband Brad Hoss in August.

“So it says so much about the world that she’s gonna grow up in. It’s really cool,” Beatriz said, before adding, “I have a feeling though it’s gonna be like Dwayne Johnson’s kids [who] don’t believe that’s his voice in Moana. He’s watched it with them, his daughter’s like, ‘Thats not you!’ I have a feeling it’s gonna be very much like that. Also my kid’s two months old and she’s also way cooler than I’m ever gonna be.”

Encanto also brought some self-reflection for the two actors, who have made an incredible career for themselves in Hollywood. For Valderrama, the film also brought a sense of community.

“Sometimes when you move to a new country, you start a new job and a new career, and you enter a new environment, you surround yourself with who that community’s gonna be for you,” he expressed. “As you thrive within it, when all else fails, when you feel out of place and you feel like the fish out of the water, just take a second to remember the roots, remember where you came from. That will give you the safety net to continue to move forward to thrive.”

“I always look back at my beginnings in Hollywood, about 26 years ago, where in television we Latinos look very different,” he reminisced. “In films, we are portrayed very different. We didn’t have the cultural roots and pride to fall back on…Films like this, that continue to break those barriers and disrupt that thought and take us into the world of wonder, we can really truly look back on our roots and say, ‘That’s me! That’s who I really am and that’s who I’ve always been.’ This is that time when we saw it change, so I’m proud of that.”

As a “huge Disney fan” who grew up with the classic animated films, Beatriz couldn’t be happier to be part of the studio’s collection of inspirational tales.

“To be alive and at a time where Disney is making its 60th animated film and then they’ve chosen to set it in Colombia and to show the beauty of the country and to center the story around a family in that country, it’s so incredible,” she stated. “It speaks to what Disney does best, which is make you feel like you identify with the heroes of the stories. Even if it’s a crab, even if it’s a lion, even it’s a princess and it’s some unknown land or even if it’s a Madrigal, you see yourself in the story and it’s so special to be a part of that.”

“And to me, the greatest gift would be to pass by some kid in the grocery store and they’re humming [an Encanto song],” she continued. “It’d be so cool! And not even just songs that I sing, but any song from the film, it would be so special.”

Wilmer Valderrama Says He Did ‘The Most’ in the Delivery Room

Pregnant Stephanie Beatriz on Becoming a Mom and Pregnancy Journey

PrevPreviousBritney Spears has no immediate plans to do an interview with Oprah Winfrey
Nextlululemon Black Friday Finds: Save on Wunder Under, Align and MoreNext