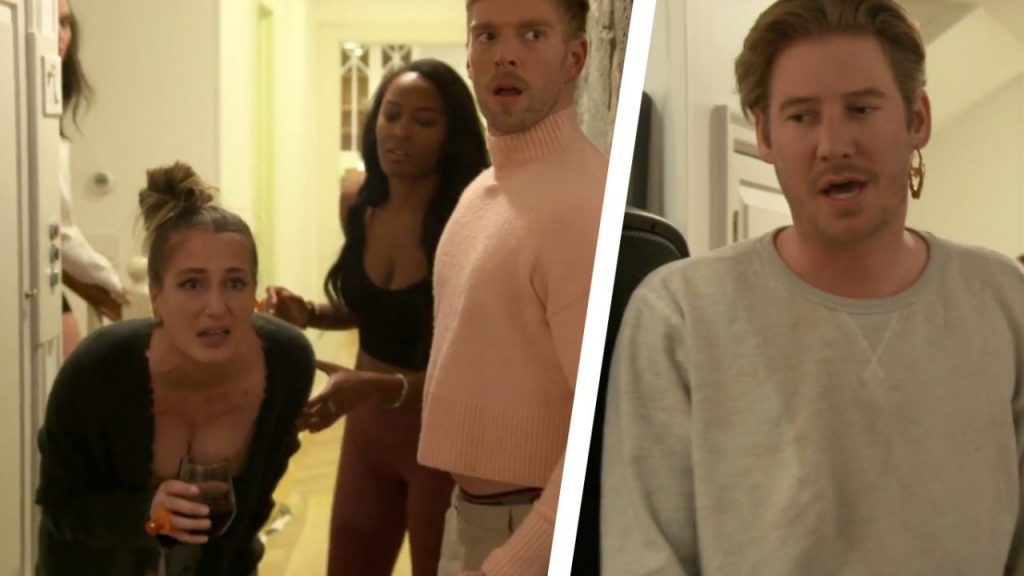 There’s nothing more iconic in the world of Bravo than a drunken fight in costumes, and the Winter House season finale is delivering just that. In ET’s exclusive sneak peek, Amanda Batula decides to pull Austen Kroll aside and ask him his intentions when it comes to her Summer House castmate, and the object of his Winter House affections, Ciara Miller.

“I was talking to Kyle,” Amanda tells Austen, referencing her fiance (now husband), Kyle Cooke. “He said that, ‘Austen, I don’t think, is like interested in a long-distance relationship.'”

“You know what, Austen? Don’t tell me it’s none of my goddamn business…” she fires back, as he begins a chorus of, “It’s not! It’s not! It’s just not.”

“You know who is my business? Ciara,” Amanda declares, flustering Austen, who seems to believe Amanda already had a conversation with Ciara about all of this.

“You’re gonna run to her and talk to her?” he asks. “We’re not gonna have a conversation regardless of what you say to her? You’re so wrong.”

“I wanted to come to you, because if it’s not what it is, then we’ll get through that and I’ll stay out of it,” Amanda tells him.

“But that’s what I’m saying: You need to stay out of it,” he tells his housemate, as the clip cuts away to Paige DeSorbo, Julia McGuire and Kyle eavesdropping on the argument.

Watch it all play out here:

“You go in there and defend your girl,” Paige instructs Kyle, removing a furry, pink hat from his head.

“You keep shutting me down!” Amanda tells Austen, who launches into the following: “I can’t deal with– this is so silly, that I can’t even. Because I’m– you know what? I’m gonna get Ciara. That’s what I’m gonna do, so you f**king clowns will f**king shut the f**k up. That’s what.”

“I’m not doing this anymore! No! F**k all of you!” Amanda exclaims, as she follows Austen (sporting a tutu) out of the room. The clip cuts away to Lindsay Hubbard asking Jason Cameron what’s going on, before the cameras return to what can only be described as chaos. Austen tells Kyle he’s “so sick of this” as Amanda cries, declaring that Austen is being “an a**hole.” Austen then makes fun of Amanda’s tears, a comment that brings her front and center to announce, “You’re a f**king piece of s**t, Austen! Go to f**king hell!”

“Dude, you’re gonna talk to my f**king fiancee like that?” a clearly inebriated Kyle asks Austen, who goes on to bring a sports metaphor into the argument: “She’s talking about things– she has no skin in the game.”

“Wowww,” Kyle ekes out. Now, it’s unclear what happened before this (or what comes after), but what is clear is that Austen and Ciara’s romance did not survive outside of Winter House, (at least not for long) but not because of this incident. The two came to the mutual conclusion that neither one was ready for anything serious.

“As much as I hate to admit it, I just wasn’t fully over [my ex Madison LeCroy] and at a place to move on like that,” Austen told ET of the decision. “I was like, I don’t want to let down someone like her, or anyone for that matter. I don’t want to be like that. I don’t want to be a half-present boyfriend. It was easy to be in it and to have fun in the house, because we were on vacation, and then when we left, yeah, we hung out in New York and she came down to Charleston, and it was just full of laughs and this and that. Then I was like, ‘OK, but you’re flying back to Atlanta,’ [which] is where she was living at the time. So that’s kind of where it was left. We talk, but never like it was in the house once life began to move on.”

“I did go to Charleston and we had a lot of fun there,” Ciara shared, referencing her and co-star Paige’s post-filming getaway to South Carolina where Austen (and Winter House castmate/Paige’s now-boyfriend Craig Conover) lives. “But I kind of knew I needed to take a step back from it for a second and realize that we’re not filming. We’re not living together anymore and the dynamic is definitely going to be different.”

“I still kind of have these feelings towards him,” she confessed. “Even though we’re not dating or anything, it’s not like… I don’t know. It’s just for right now this is what’s best for both of us. I’m not saying that the door is shut completely on at a hundred percent.”

Winter House: Lindsay on Romance With Jason, Relationship With Austen